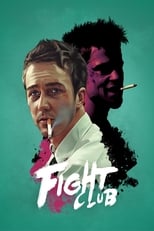 Release: Oct. 15th, 1999
Runtime: 2 hours, 19 minutes
A ticking-time-bomb insomniac and a slippery soap salesman channel primal male aggression into a shocking new form of therapy. Their concept catches on, with underground "fight clubs" forming in every town, until an eccentric gets in the way and ignites an out-of-control spiral toward oblivion.

We didn't find any linked discussions for this film. Here are the results of a quick search of possibly related threads:
0 Fight club who would you fight
If you had to fight A musician an actor and a historical figure Who would they be. For me I would choose. Musician - Johnny Cash ( although I probably wouldn't live to tell the tale ) Actor - Tommy...
92 Fight Club is Gay?
***********SPOILERS APLENTY********** I'm not knocking homosexuality or anything but... there are so many macho guys who pick Fight Club as their favourite movie that I think it's time they read...
20 Ode to Fight Club
A Chaotic Ramble about the 1999 Film All you really need to know about the movie “Fight Club” (1999) is that the nameless narrator, played by Edward Norton, has a penguin as his “power” animal. ...
13 Fight Hug Trailer (If "Fight Club" was a rom-com)
Hey guys, me and a friend of mine just finished this project.We did a trailer for Fight Club but made it look like a rom-com. Let us know what you think, all feedback is appreciated! Official Poste...
1 Fight Club : Name that song
I was wondering what song is being played in the background when Brad Pitt and Edward Norton walk into the Lous bar to go down to the basement to first start fight club as everyone else in the bar is ...

Cobpyth It's not original anymore to like this film and cinephiles often roll their eyes when they hear this film mentioned for the millionth time, but I still think Fight Club is 100% pure awesomeness.
READ REVIEW

TheDOMINATOR It's dark, complex, highly entertaining, and demands that you truly [I]think[/I] about what is going on at every moment..
READ REVIEW

Frightened Inmate No. 2 i've semi-avoided this movie for years not because i thought i wouldn't like it, but because i knew i'd have a hard time separating it from its reputation as the ultimate bro intellectual movie with the most obnoxious fans (also i knew the ending already).
READ REVIEW
View All (11)