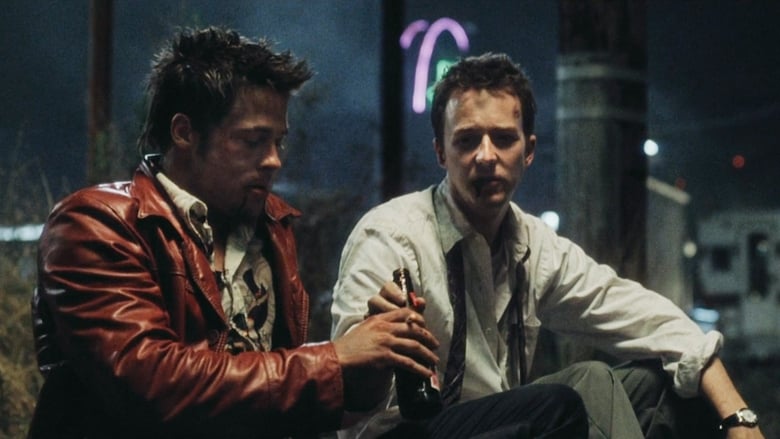 I don't know where to start. This movie was recommended to me by more than one member here, and solely because of that I went out and bought this movie soon afterward and watched it. I was blown away.

Everything from the dialogue to the musical score to the acting was just about flawless. The plot/storyline, while at first somewhat unclear, was enthralling after I began to really realize what it was all about; the action, while not action packed with incredible special effects, was very good and well-placed; and the characters were very relatable, complex, and force you to become intrugued by them and their actions in the movie due to their high likability and interest factors. All of that plus more about and in the movie was remarkable.

Brad Pitt delivered an excellent performance--one of the best of his career to date--and it goes without saying that Edward Norton nailed his role dead-on. Truth be told, Helena Bonham Carter's character I connected with the least and didn't like nearly as much as the others, but even her character was brilliantly portrayed by the actress, herself, and filled with detail and yet tantalizing mystery. Add in the very likeable "Bob" and you have yourself a movie filled with a great set of both characters and actors who play them alike.

That being said, as I mentioned above, during the first half-hour or so I found myself struggling to figure out what exactly was going on or what exactly the movie was even about. But as the Narrator began to explain things more in-depth as the movie progressed, and as the characters in the movie began to progress more toward the main plot, things quickly started to become more clear and understandable. From then on--from about 45 minutes to an hour into the movie and on--I was totally engrossed to the very end.

And what an ending it was, what--in my opinion--is one of the greatest endings of any movie in cinematic history. Like "The Mist," Fight Club has a totally insane, unexpected (well, for me at least) double-twist ending which contains two "major events." The first "event" will have you saying "Wow," and shortly afterwards "Ah, now I get it!" And the second "event" will just leave you breathless.

When I say two "events," I mean
Event 1: A certain someone realizes something.
Event 2: A certain few things go bye-bye.

My final thoughts on Fight Club is that it's one of the best movies I've ever seen, and I'm saying this after just having watched it a couple of nights ago for the very first time. It's dark, complex, highly entertaining, and demands that you truly think about what is going on at every moment. Awesome, spectacular, remarkable film on a level with other greats such as Donnie Darko that will remain one of my favorites forever.
» More about Fight Club
» More reviews of Fight Club
» More reviews by TheDOMINATOR