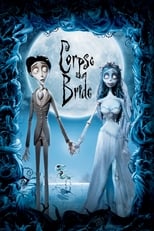 Release: Sep. 12th, 2005
Runtime: 1 hour, 17 minutes
Set in a 19th-century european village, this stop-motion animation feature follows the story of Victor, a young man whisked away to the underworld and wed to a mysterious corpse bride, while his real bride Victoria waits bereft in the land of the living.

We didn't find any linked discussions for this film. Here are the results of a quick search of possibly related threads:
2 Corpse Bride
The Corpse Bride is the epitome of a classic love story with a bit of a twist. Two young strangers find love after being forced into an arranged marriage. Already, they have a major obstacle to over...
14 'The Corpse Bride' (2005)
'The Corpse Bride' d. Tim Burton screenplay: Caroline Thompsan and Pamela Pettler release date: October 2005 genre: stop-motion, folk-tale, fantasy...think 'The Nightmare Before Christmas' com...
6 Corpse of husband in bed being given a cup of tea by wife! 1960s, UK
Saw last 2 minutes. 1960s 'Ealing' type film. Crowds of people running up the flights of stairs holding their noses. They burst into the apartment and find an old lady innocently taking her dead an...
3 kid carrying a corpse in a rolled up carpet through a neighborhood
A teen age boy (or young man) is walking through the streets of a suburban neighborhood early in the morning carrying a rolled up carpet on his shoulder, with a corpse inside of it. It keeps slippi...
10 The Princess Bride
Hello, everyone, I would like to talk about the princess bride tonight, please comment what do you think about the movie, what is your favorite part, character, quotes?...

MovieMeditation You would think that these worlds would remain separated, but that is only until Victor comes up with a smart way to victory, by fooling the dead into having the wedding between him and the corpse bride on the top floor also known as the land of the living.
READ REVIEW

TheUsualSuspect If you're looking for great animation and musical numbers, then Corpse Bride is the film for you, other-wise the story is kinda of dead..
READ REVIEW

MovieMad16 Its an interesting idea and The Character Of The Corpse Bride is a sad character in which sad things happen to her.
READ REVIEW
View All (4)