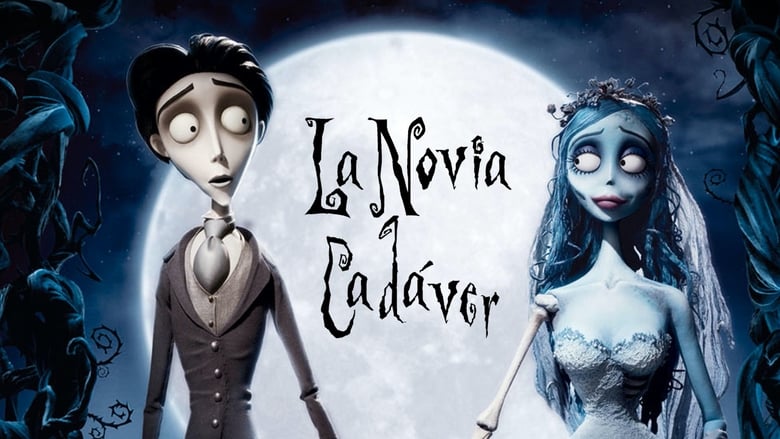 REWATCH
Tim Burton and his accomplished animation corps ride the audience straight through
the underworld and above the groundbreaking evolution of stop-motion animation!

The hauntingly humorous uncrowned ruler of darkness stands behind this bride story from hell, which is essentially a barebones romantic story about a young man named Victor, who is pushed into an arranged marriage by his parents and the parents of his coming bride, Victoria, for the sake of raising social class and restoring wealth, respectively. The story takes place in the Victorian-era, ironically enough, but that is also the last thing being a victim of traditions and tales of formality. Burton breaks free from the banality of boring animation and creates a continued vision of his craft for crude humor combined with bright cleverness. You can feel the spirit of ‘The Nightmare Before Christmas’ with the same skin and bone character designs, which is escorted elegantly by Burton’s familiar blend of fearsome fun and chilling warmth – together with the brilliance of stop-motion animation the dead characters are resurrected and make this movie come to life in a way that demands both skill and skull…

‘Corpse Bride’ starts by inviting us into the dying lands of the living, which seems bleak and bare from any kind of real heart or humanitarian response. This is a dark place, completely drained of color and character, where people go about their routine rudiments without interrelating or interfering with each other’s daily doings. The opening credits are simple and mysterious, moved flawlessly forward by a daunting dream-like score by Burton’s favored baton, Danny Elfman, who successfully captures the canny atmosphere of the film by delivering a grand gesture to the melancholy and yet moving story of undying love. Elfman’s score embraces the ambiance of the film and elevates what is already an astonishing accomplishment in its own right. Scoring a soaring piece of artistic beauty is one thing, but Elfman also wrote and composed each and every song, which happens to be some of my favorite musical makings ever in an already constantly creative film. Starting from the creative cross-cutting intro piece that…

describes the plot while our guests reach the spot; not giving anything away but just enough to clearly say – it’s a beautiful and terrible day for a wedding. We see them crossing the street in a carriage, but only so to ensure the marriage. When one family leaves another one grieves; one is broke beyond belief the other in social mischief – but both make profit from this glorious wedding. Soon they set feet in a place where they rehearse for days, but the groom somehow cannot get it. He walks for hours to practice his vowels, but he seems to be completely out of luck. But all of a sudden there’s change, he stumbles slightly but finds his pace; his words come fluent and he starts to dance, he bows down faintly and put the ring on a branch. He did it all well, no more need to rehearse, but little did he know he just lifted a curse. While Victor was in trance he proposed to a branch, but I can tell you it was worse than you think; with some vowels and a dance, there was a change of plans and his bride became a corpse in a blink. Once a bride now a corpse, left for dead but of course; now she walks in the land of the living. The groom turned practice to mistake, left the dead wide awake – this is a terrible day for a wedding.

Hey now, wait a minute, what just happened there? I’m sorry everybody, I got a little carried away I guess… moving on… Our dear Victor appears to be in grave danger as he arrives in the land of the dead, which is placed below the grounds, where everything is upside down and everything seems to be going down hill for our doubtful hero. Victor has a bone to pick with someone, and he really wants one particular bone with one specific ring on it, in order to return to the land above and marry his loved one – because even if the marriage was arranged, Victor and Victoria have more in common than their given names. The underworld may be full of dead people, but never has a place felt so alive, which Victor quickly finds out as yet another brilliant song begins to play. It is called ‘Remains of the Day’ and plays out as a soulful composition sung by soulless corpses, who sings and shows us the story of corpse bride, and how she ended up under ground and overrun by the saturated soil of the forest. Danny Elfman once again opens his creative cranium and cracks out another catchy tune, which shows us that dead men do tale tales and do it tremendous well. This jazzy juncture in the movie simultaneously shows off the skills behind and in front of the camera, with superb storytelling and brilliant characters, who moves fluently along to the music with a magnificent sense of humor. There are plenty of creative gags and witty visuals in the land of the dead, which is all vividly brought to life in a stream of powerful colors and cool set designs.

The film continues to move up and down in altitude, between our world and the underworld, but it never moves up and down in quality. It is charming and enchanting entertainment, which has Tim Burton’s signature blend of dark humor and weird wittiness all over it, which is being presented both in direct and indirect manners. ‘Corpse Bride’ has definitely drawn its inspiration from Burton’s previous works, but that doesn’t mean it should be compared to anything in my opinion. A film that holds both rotten corpses and rotten personalities feels as fresh as anything to me, with a simple story that keeps making surprising twists and turns throughout. You would think that these worlds would remain separated, but that is only until Victor comes up with a smart way to victory, by fooling the dead into having the wedding between him and the corpse bride on the “top floor” – also known as the land of the living. Meanwhile, things are already looking pretty dead up there, even before the dead has arrived, since the wedding above is still going ahead after a new groom showed up to marry Victoria – a man named Lord Barkis, who certainly has a few skeletons in his closet. Unfortunately for him, the wedding plans turn sour once the rotting corpses and skeletons show up to ruin the “party” upstairs. This film doesn’t stay behind closed caskets at this point either, especially not in this wild third act that happens to be both fun, fearsome, exciting and frightening all at the same time. It is even a little touching and sweet in way, though it certainly ends on a typical Burtonesque note – which is a good thing.

Who knew that a plot guided by the cold hands of the dead would end up feeling so warm and full of heart. Who knew that being dead could be so cool and colorful and have you almost die of laughter at times. Okay, maybe you won’t exactly die of laughter, but this is definitely a fun little film full of everything you could ask for and more. Maybe it wouldn’t be right to say Burton has never been as lively and darkly witty as he is here, but it is damn sure one of his finest and most twistingly amusing tales of terror from his web-infested mind. ‘Corpse Bride’ is absolute genius and the non-stop entertainment escorted by stop-motion animation is just a joy like no other… It may be an obvious pun, but I have to say it anyways – this film is just to die for, simple as that!