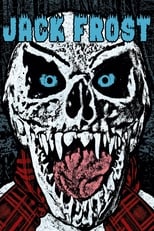 Release: Nov. 18th, 1997
Runtime: 1 hour, 29 minutes
As a notorious serial killer is being driven to his execution, the truck carrying him encounters a bizarre accident that transforms him into a mutant snowman. The sheriff who originally caught the psychopath has remained concerned about his return, and it seems that his fears were well-founded. Before long, bodies pile up, all killed in gruesome wintry ways. Can the sheriff stop the murderer's icy reign of terror?

We didn't find any linked discussions for this film. Here are the results of a quick search of possibly related threads:
9 TV Movie about young girl/boy. Boy named Jack. Dies. Trees say "Jack" in the wind
Maybe around 1979. That's about all I can remember. I think the boy and girl were poor and lived in the woods. The girl is comforted by the sound of the wind in the trees because as the branches hit e...
1 R.I.P. Warren Frost
For all the Twin Peaks fans and David Lynch club members, Warren Frost died a few days ago. He played Dr. Will Hayward, Donna's dad on Twin Peaks. P.s. Had no idea he was Mark Frost's (co-creato...
14 Frost/Nixon
CAST: Rebecca Hall Kevin Bacon Sam Rockwell Michael Sheen Patty McCormack Frank Langella Oliver Platt Max Elliott Slade Holly Weber Jenn Gotzon PLOT: A dramatic retelling of the post-Watergate telev...
27 Frost: A New Killer
I Heard About The New Killer this would be the one of the top killer movie's the top 4 is Jason Voorhees Freddy C. Mike Myers !NEW! FROST frost is goin to be like jason he is immortal...
3 Frost/Nixon Review
I've done a search and couldn't find a thread on Frost/Nixon. Has no one else been to see it? If not you're missing out on some excellent performances. A few friends have been put off by the thought...

TheUsualSuspect The next sequence is the most famous part of the film, the snowman rapes her for comedic effect.
READ REVIEW

HashtagBrownies When I saw this HoF I thought of the film and said *GASP* That's the perfect film to nominate.
READ REVIEW

Citizen Rules But when Jack Frost comes back as the snowman and starts killing, the film got boring for me.
READ REVIEW
View All (5)