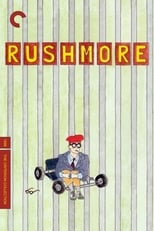 Release: Dec. 11th, 1998
Runtime: 1 hour, 33 minutes
When a beautiful first-grade teacher arrives at a prep school, she soon attracts the attention of an ambitious teenager named Max, who quickly falls in love with her. Max turns to the father of two of his schoolmates for advice on how to woo the teacher. However, the situation soon gets complicated when Max's new friend becomes involved with her, setting the two pals against one another in a war for her attention.

We didn't find any linked discussions for this film. Here are the results of a quick search of possibly related threads:
34 6th HOF-Rushmore
Nominated By: Seanc This was a no brainer for me. My favorite film from my favorite director. It shows off all his strengths. Great characters with a great script. All the Anderson quirkiness in ...
8 Rushmore (1998)
Finally got around to REALLY seeing this, start-to-finish. Wow! Much funnier than I'd expected. While I thought The Royal Tenenbaums was pretty good (though not great), I thought this was much, much b...
1 Rushmore question....?
In Rushmore, there are a few refrences to the movie "Heat". durring the "Serpico" play one of the characters snaps his fingers twice and says "Where I got'a be" like in...
39 Mount Rushmore of Cinema
Who would be on your Mount Rushmore of cinema? (Don't think there is a thread for this, anyway) Can be directors, actors, producers, etc. whatever you think fits. For me it would go like this: Alf...
28 Who's on your Mount Rushmore of film directors and why?
These aren't necessarily your favorite directors, just ones you think are most iconic or important. Hitchcock - laid the blueprint for how to build suspense Spielberg (maybe split Lucas' face onto...

kkl10 Each one will try to win the teacher's love in his own way and naturally the romantic mechanics between a bold 15-year-old boy and a woman with the competition of an even older man mixed in is a recipe for bizarre and hilarious situations throughout.
READ REVIEW

TheUsualSuspect ...when you have such a talented cast and director, you'd expect to enjoy the film a lot more..
READ REVIEW

Gideon58 Primarily, a pretty teacher at Rushmore named Miss Cross and his friendship with a wealthy benefactor of Rushmore named Herman Blume, unfinished business that blossoms into a bizarre love triangle that moves in some shocking and logic-defying directions.
READ REVIEW