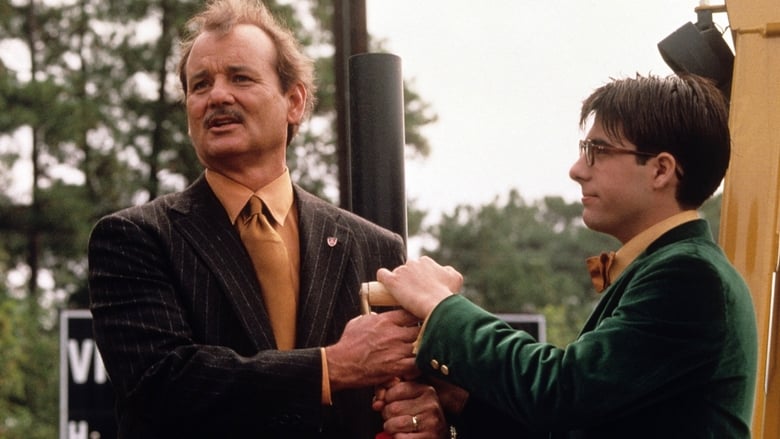 by TheUsualSuspect
posted on 6/06/06
in
Rushmore (Wes Anderson)

"Murray Shines In This Overrated Piece Of Cinema"

Max Fischer attends Rushmore, a private school. His grades aren't the best, but he's the king of extracurricular activities. He's put on academic probation and falls in love with a teacher, Miss Cross. Although, he's not the only with an eye for Miss Cross. Herman Blume, a wealthy industrialist also finds his heart to be stolen from the teacher. Now Max finds himself in a love triangle he can't seem to get out of.

Wes Anderson's films are usually quirky, funny and brilliantly written. Bottle Rocket and The Royal Tenenbaums manage to fall under all three categories. Life Aquatic also managed to have these elements, but not to the same level as the previous two. Rushmore, unfortunately only offers us one good thing out of the three, it's script.

Rushmore is a great film, on paper. It gives you the sense of a smart film, it's just too bad that the brains behind it is all bark and no bite. Anderson and Wilson are great writers, when they are together they can pull some pretty neat rabbits out of hats. Rushmore gets a lot of praise which has me scratching my head. Do people really like slow, boring, and a main character that you simply want to beat the crap out of? Maybe everyone liked Bill Murray so much that they just had to rave about the film, because it's Murray who shines in this overrated piece of cinema.

Jason Schwartzman plays his character very well, but his character is so dull and will make your eyes roll more then once. We are suppose to like the main character, but with Rushmore, I found my self begging for something interesting to happen. I was hoping that Max would suddenly stop being an uninteresting character, and someone that I can enjoy on the screen. Alas, this never happens. Bill Murray on the other hand, single handily saves this film from disaster. He is so wonderful in this film and this role belongs near the top as one of his best. All the characters, with the exception of MAX, are interesting. If Schwartzman's character only had one tenth of the charm that Murray pulls off, maybe I could have liked the film a bit more.

The film soundtrack is quite good. It helps bring it's depressing mood up a little bit. Anderson always seems to have good music littered throughout his films and Rushmore is a good example. From Cat Stevens to The Rolling Stones, you'll probably end up liking the soundtrack more then the film.

Ultimately I can't give this film a recommendation, but I can give it a 7. It may be a contradiction, but the film is well made. Everything flows well with it, the characters, the music, the directing and most of all it's script. But when you have such a talented cast and director, you'd expect to enjoy the film a lot more. Skip Rushmore and check out The Royal Tenenbaums, because it's simply immensely superior to this.