by TheUsualSuspect
posted on 5/10/18
in
Black Panther 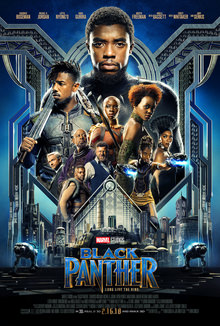 Finally got a chance to see this film, being a dad has now taken my movie watching time away from me. Nonetheless, I found a way...even if it is a little late to the party. I sit here, literally astounded by the success of this film. No one can sit here and tell me they expected this film to do as well as it did. Sure, people were expecting it to be a huge success, but the number one Marvel film? 3rd highest grossing film of all-time domestically? This beast beat out Titanic and not just by a slim margin either. It's going to be the third film to ever cross 700-million dollars. The other two being Avatar and The Force Awakens. Is it really that good of a film? Is it just that a certain community finally has a cool, kick-ass hero to get behind? Is it that they wanted to support this film no matter the quality? I think it's all of that and more.

Wakanda is a technologically advanced city like no one has ever seen before. Hidden from our world, we only see it as a sandals and spears village. T'Challa returns to Wakanda to claim the throne after his father's death in Civil War. He is challenged for the throne by an outsider who has mysterious ties to Wakanda itself. Will this outsider defeat T'Challa and claim the thrown? What nefarious plans does he have for the city and the world at large?

Black Panther is one smooth mofo. He is literally the James Bond of the MCU. His little sister is his own Q, making hi-tech gadgets to use on his spy missions. This spy mission dove tails into a unique car chase which sets most of the film in motion. Coogler manages to keep the action within frame and never loses the viewers spacial awareness. He does this again, marvellously when characters fight atop a waterfall, which are the highlights of this film for me. Those sequences are simple, effective and showcase some beautiful costumes. I appreciate the fact that my favourite scenes are two people fighting, no explosions, no chase, minimal cgi. It brings it all back to the story. Who are these two people fighting and why, what are the stakes? It feels real here, something that the climax is not able to replicate.

Black Panther falls into the generic third act that all marvel films seem to believe in. Massive fight scenes on an open field/large area where the CGI takes the front seat. It especially hurts Black Panther because I don't think the CGI is particularly that effective. I point to the scene where TWO Black Panthers are fighting one another and the scene just feels fake. I don't believe these two actors are there, nothing is tangible. It takes away from the drama. Get me back on that waterfall and I'm game.

As much as I thought Chadwick Boseman had charisma for this role, it's the supporting cast that shine bright here. Lupita Nyong'o as a possible love interest and Wakandan spy, Danai Gurira of Walking Dead fame, the most skilled fighter and Letitia Wright as the aforementioned sister, with brains and humour. These three ladies steal the show from Boseman in every scene and elevated this film for me. Yet the one real standout is obviously Michael B. Jordan as Killmonger. An MCU villain with real goals, real problems and relatable emotions. This film is not concerned about world domination, it's very self contained. The problems arise from black on black violence. I thought it was a good choice to not make the main villain white, it opens up the conversation a bit more as to what Coogler was trying to accomplish.

Black Panther is fun, fresh and falls right in line with how other MCU films work as a cog in a bigger wheel. Some missteps hurt the film, one I find to be a glaring issue involves Get Out's Kayuuya's motivations for who he is fighting for being incredibly weak and unearned. Some shoddy CGI sequences take you out of the experience, but as a whole, this film is a winner.
» More about Black Panther
» More reviews of Black Panther
» More reviews by TheUsualSuspect