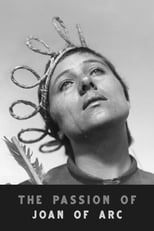 Release: Apr. 21st, 1928
Runtime: 1 hour, 22 minutes
A classic of the silent age, this film tells the story of the doomed but ultimately canonized 15th-century teenage warrior. On trial for claiming she'd spoken to God, Jeanne d'Arc is subjected to inhumane treatment and scare tactics at the hands of church court officials. Initially bullied into changing her story, Jeanne eventually opts for what she sees as the truth. Her punishment, a famously brutal execution, earns her perpetual martyrdom.

We didn't find any linked discussions for this film. Here are the results of a quick search of possibly related threads:
16 Why are there very few subtitles in The Passion Of Joan Of Arc (1928)?
I watched the movie but I felt like I missed half of it, cause only certain parts of the dialogue are subtitled, and most of the dialogue is not subtitled at all. I was watching the criterion collect...
7 Passion of Joan of Arc (1928) is pretty graphic, man
So, I've just seen Passion of Joan of Arc from 1928 and I'm blown away. The acting is superb but what struck me was how graphic it was. It had blood (real too!), disturbing close ups on torture to...
38 R.I.P. Joan Rivers
Joan Rivers has passed at the age of 81 after being taken out of a medically induced coma yesterday. She was undergoing surgery on her vocal chords when she stopped breathing and was rushed to Mt. ...
5 Which version of Joan of Arc?
Are there 3 different versions of The Passion of Joan of Arc? 1. 24 fps version 2. The Lo Duca version 3. 20 fps version Can anyone help? Which is the best version to watch? I get that fps is fra...
6 RIP Joan Fontaine
Bio: ...

Zotis The film itself started with a summary of the origin of the film, the actual physical record of the real life trial of the actual historical person of Joan of Arc.
READ REVIEW

Jack1 After watching this, and I didn't know a great deal about Joan of Arc prior to watching the film, I was persuaded to research into her life more thoroughly, and she certainly seems to be a divisive historical character.
READ REVIEW

Thief The Passion of Joan of Arc is based on the actual trial record for Joan (Rene Jeanne Falconetti) after being captured by England, and features her interrogation and subsequent execution at the hands of the clerical court.
READ REVIEW
View All (5)