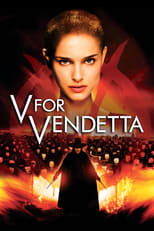 Release: Feb. 23rd, 2006
Runtime: 2 hours, 12 minutes
In a world in which Great Britain has become a fascist state, a masked vigilante known only as “V” conducts guerrilla warfare against the oppressive British government. When V rescues a young woman from the secret police, he finds in her an ally with whom he can continue his fight to free the people of Britain.

Citizen Rules The scenes where Evey (Natalie Portman) is imprisoned were somber and sobering...and yet uplifting in the message of overcoming one's innate fear of death.
READ REVIEW

JayDee We see their actions and words frequently mirrored throughout the film, and come the film's conclusion both individuals have arrived in the same place.
READ REVIEW

TheUsualSuspect The film and the graphic novel are really different, so I see myself commenting on this as a film itself and not in any way to the original source material.
READ REVIEW
View All (5)