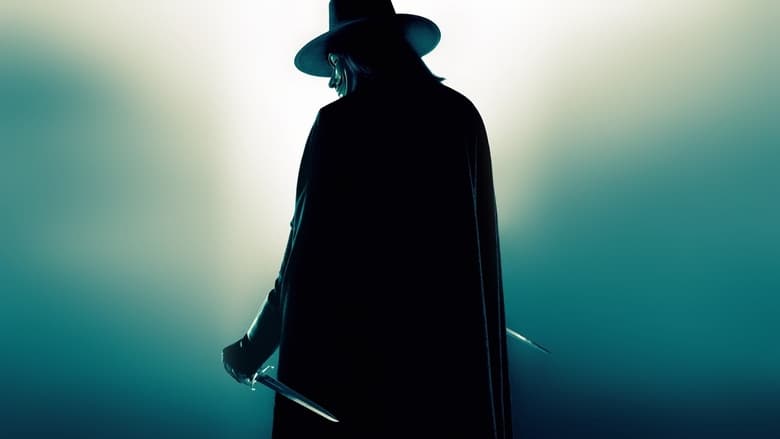 Don't get too excited though, it's just a one off for the moment. Originally I just intended to do a paragraph or two for the movie tab, but as with The Godfather it started to get away from me. I just decided to go with it and do a full review. And I even included some trivia just for you Rodent!


Plot – In the year 2020 Britain has become a strongly fascist state. Under the rule of an authoritarian government there seems to be little hope for the people, until the arrival of a masked freedom fighter by the name of V (Weaving). While on patrol, V comes across the secret police known as The Fingermen harassing a young woman. Rescuing her he finds an unlikely ally in the girl, who he comes to know as Evey (Portman). Destroying the Old Bailey courthouse he begins a revolution that he plans to culminate in one year's time by blowing up the Houses of Parliament.


This is a tremendously interesting and intriguing film. It's a film that delivers on costumed action thrills, but also proves to be though provoking stuff and it is able to address a number of large issues and themes such as fascism, authoritarianism, the power of an idea, anarchism, vengeance, corruption, idealism, a few other isms!

and about knowing the time when one has to rise up against their own government. When do things cross the line from it being an act of treason to a noble action which must be taken against an inept or corrupt government to change things for the better?


Alan Moore was originally inspired to write V for Vendetta by the political landscape of of early 1980s Britain. And while we're now a couple of decades down the line the story still feels relevant. And in all likelihood it will continue to do so. We are always going to be either in the midst of or in the recent wake of something along the lines of an unpopular war, a political scandal, a financial meltdown or who knows what else. And it doesn't take a lot of effort to get from this film to the Arab Springs which have occurred over the last couple of years across the Middle East and Africa in countries such as Egypt, Tunisia and Syria. In these countries rulers have been forced from power, civil uprisings have occurred and major protests have taken place.


Film trivia – Hugo Weaving was not actually the first man to don V's Guy Fawkes mask. James Purefey was the man originally cast as V, but he had to leave the production after four weeks of filming as he felt he couldn't breathe behind the mask. And in fact some of the footage he shot still exists within the film, with Weaving's voice merely dubbed over his.
Portman delivers a strong performace even if her accent was a little on the dodgy side at times. That aside however she does very well, fully convincing in the character's arc from law abiding citizen to renegade vigilante and right hand man to V. Her scenes when Evey has been imprisoned are particularly effecting and moving. She is outshone however by her masked co-star. While we never see his face at any point in the film Hugo Weaving deserves a lot of credit for his vocal performance. He both conveys and evokes a lot of feeling and passion merely through the use of his voice and creates an anti-hero who is a mysterious, eccentric and charismatic force. A compelling performance. In general the film is filled out with a strong supporting cast. Stephen Fry is always a pleasure to watch, and having no idea of his involvement it was a delightful surprise. Oh and while it may stray into over the top territory every so often John Hurt's Chancellor Sutler makes for a fantastically detestable villain.


Despite being a big comic guy I have never read Alan Moore's original creation, and I have also been lucky enough not to be spoiled about the movie in the six years since its release. That's something I was very pleased with as it meant I was able to be gripped completely by the story; I was thrilled by V's developing plan (loved the moment were he sends out all the masks), taken in by every twist and turn and developed a real sense of caring and fear for the wellbeing of the characters involved. In particular the moment were we learn the reality of Evey's imprisonment was a real gut punch for me. What is interesting is watching the convergent evolution that develops between V and Evey. We see their actions and words frequently mirrored throughout the film, and come the film's conclusion both individuals have arrived in the same place. The film also makes us question V's actions. While things undoubtedly have to change is he the one to instigate it? And is his course the correct one? Does vengeance have a place in a revolution?


As quite a staunch liberal I have to admit to being quite taken with the film's leftist views and ideas. And I always love when digs are taken at large establishments such as the government and the church. I particularly enjoyed the none too subtle swipe at the church through the bishop with a penchant for young girls.


Film trivia – There is quite a memorable scene in the film where V knocks over a large series of red and black dominoes which when they fall form a giant letter V. To set the scene up required 22,000 dominoes, which were assembled by 4 professional domino assemblers in a total of 200 hours.
The actual look of the film is a bit unusual and I'm not exactly sure what to make of it. It's not your typically dystopia landscape, it's just all rather grey. And even the way it is filmed did not feel like your typical big budget Hollywood flick, more like a high quality British TV drama. I don't know if they wanted to create a drab, bleak landscape to give it quite an 80s veneer as if the country has stagnated; as if it has become trapped in time under this oppressive regime. And the only time that colour ever explodes (literally) onto the screen is at the hands of V. The design of V himself is fantastic, very powerful and instantly iconic. The moment near the film's conclusion where hundreds/thousands of people march through the streets of London dressed in full V garb of cape and mask is a wonderfully striking and stirring image.


And there are very glaring flaws in my opinion. The pacing is perhaps a little languid in places and there is certainly a couple of instances of pretentious sounding dialogue; dialogue that may have worked fine on the pages of Moore's comic, but comes across as clumsy on screen. In particular I'm thinking of V's alliterative introduction to Evey which includes 55 words beginning with the letter v. Evey's summing up at the film's conclusion is also falls in to the same trap. That aside there is much more to love than not.