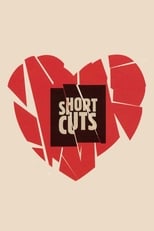 Release: Sep. 5th, 1993
Runtime: 3 hours, 7 minutes
Many loosely connected characters cross paths in this film, based on the stories of Raymond Carver. Waitress Doreen Piggot accidentally runs into a boy with her car. Soon after walking away, the child lapses into a coma. While at the hospital, the boy's grandfather tells his son, Howard, about his past affairs. Meanwhile, a baker starts harassing the family when they fail to pick up the boy's birthday cake.

We didn't find any linked discussions for this film. Here are the results of a quick search of possibly related threads:
2 Short Cuts vs Magnolia
Better film? It's no secret that PTA borrowed pretty heavily from Short Cuts to make Magnolia. I love both films. Magnolia is probably a bit more entertaining, and has a bit of a lighter tone. ...
45 Crash vs. Magnolia vs. Short Cuts
Crash, Magnolia, Short Cuts. I watched these three films in that order. I conceed as others have noted that they posses similarities to such an extent that they are clearly not coincidental. Let's ...
9 Best cuts
I don't think there's many people who can afford to buy 2 dvd versions of essentially the same film so which cuts are the best? The ones which i can think of that have directors cuts (or un-rated i t...
15 Movies That Need Alternate Cuts
List, name, or describe films that you feel should have alternate cuts, be it Director's Cuts or otherwise....
26 Original Vs. Director's cuts
What are some of the MoFoers favorite director's cuts? What films have them and don't need them? How many got worse with free reign given to the director? One of my favorites of all time is Blade R...

Cobpyth The film features a rich amount of interesting characters, Altman's directing is exceptionally great (there are a couple of really cool jokes, using some well timed cuts) and all the different plotlines are just very enjoyable and interesting to observe.
READ REVIEW

Frightened Inmate No. 2 It never made me interested in it beyond when we initially meet the characters, whereas Short Cuts keeps making subtle character changes, and takes the characters and stories to new places.
READ REVIEW

meatwadsprite Unlike other giant films that thread multiple narratives together , it doesn't have any huge underlying themes - rather it is simply a enormous character driven story.
READ REVIEW