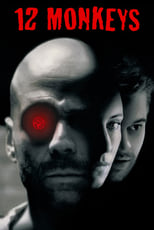 Release: Dec. 29th, 1995
Runtime: 2 hours, 9 minutes
In the year 2035, convict James Cole reluctantly volunteers to be sent back in time to discover the origin of a deadly virus that wiped out nearly all of the earth's population and forced the survivors into underground communities. But when Cole is mistakenly sent to 1990 instead of 1996, he's arrested and locked up in a mental hospital. There he meets psychiatrist Dr. Kathryn Railly, and patient Jeffrey Goines, the son of a famous virus expert...

32 Ocean's Twelve
from IMDB: "Ocean's Twelve" involves Danny Ocean (George Clooney) and his gang of hustlers from the first film (Brad Pitt, Don Cheadle, Matt Damon, Carl Reiner) heading off to England to ...
13 12 Monkeys
I just finished watching 12 Monkeys and ihave to say i enjoyed it. One of the best time traveling movies, if not the best,but i just have one question....how many times does bruce go into the past?...
21 12 monkeys
Just a quote: I am mentally divergent. Even though I conquered the barbaric hords on the moons of saturn, I COMPLETELY understand it's a product of my mind. I have mental divergency. Imagine Bruce's...
1 Have a twelve year old talk to you like that
There was a show or movie when they discussing a rude kid and after words the guy responds in a funny way “ I know it’s so demeaning when a 12 year old talks to you like that “””” In like a funny w...
18 Twelve Years A Slave
Move aside Quentin Tarantino, because Steve McQueen is coming to completely knock you off your horse with a far superior movie about slavery. "A man living in New York during the mid-1800s...

meatwadsprite 12 Monkeys is the best time travel movie I've seen and even though it's characters aren't as important to the movie as they should be - it entertains and provokes thought like no other Gilliam movie has for me.
READ REVIEW