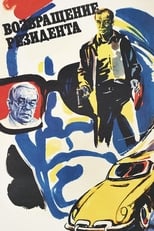 Release: Dec. 17th, 1982
Runtime: 2 hours, 9 minutes
After returning from the USSR, Tulyev was subjected to rigorous verification of his former "owners". He continues his work in Western intelligence, but already as a Soviet intelligence officer through the First Main Directorate of the KGB of the USSR. In a new capacity, he establishes the whereabouts of Hitler’s criminal Hoffmann, who was once sentenced to death, and helps the authorities arrest him. However, as a result of the conflict within...

4 70s/80s Agent Movie - Secret agent by brain manipulation?
Hello, am desperately seeking a movie from the late 70s probably early 80s but unfortunately I do not really remember much of it. I googled for months after it reappeared to my memory but I give in...
4 Secret agent movie from the 80s help please !
Hi, I can not remember the title of an action movie from my childhood. The star in the movie uses secret weapons like in 007: a chewing gum that in contact with steel burns and melts it, and als...
28 XXX - A New Breed of Secret Agent
Anyone else looking forward to this flick? It stars Vin Diesel and Samuel L. Jackson. I think someone said of those movie "It ain't your father's spy movie." It sounded very interesting, but...
3 Game Show Host by Night, Secret Agent by day?
What was the name of the movie in which the main actor was a Game Show host (in USA) by Night and a Secret Agent by day? In once scene, he is double-crossed by another secret agent, who tries to pois...
3 Hitman: Agent 47
Mr.47 is Back!!...