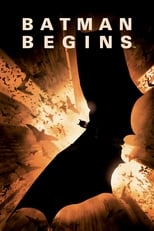 Release: Jun. 10th, 2005
Runtime: 2 hours, 20 minutes
Driven by tragedy, billionaire Bruce Wayne dedicates his life to uncovering and defeating the corruption that plagues his home, Gotham City. Unable to work within the system, he instead creates a new identity, a symbol of fear for the criminal underworld - The Batman.

We didn't find any linked discussions for this film. Here are the results of a quick search of possibly related threads:
20 which batmobile? batman 1989 or batman begins
i ve always found it that a superhero should have a bad ass car, and since i knew about batman since i was a kid i found the design fascinating of the batmobile when i watched the 1989 film and the 19...
61 Batman Begins
Spoiler Alert: For those who liked Joel Schumaker's Batman, do not go and see this film, there is no neon or bat-nipples anywhere!!!!! IMO this is the best comic adaptation so far. Next to Sin Cit...
31 Batman Begins
The following is from aint it cool news View Spoilers WARNING: "Batman Begins" spoilers below We begin, as the screeching of bats and the darkness of wings gives way to sun...
6 10 Minutes of 'Batman Begins'
If you haven't watched the season finale of WB's "Smallville", well then you are in luck. Here is the ten minutes of Batman Begins that aired that night. ...
10 The Next 'Batman Begins ' Poster
...

BraedenG33 Following the failure of Batman & Robin, Christopher Nolan brought Batman back in a whole new way, never seen before on film (as most of the films before were much campier and comic book-ish, for better or worse, than Nolan's adaptation).
READ REVIEW

JayDee This might prove to be quite a controversial view but I have to ask, am I the only one who thinks that Batman Begins is actually the best film of Christopher Nolan's Dark Knight trilogy.
READ REVIEW