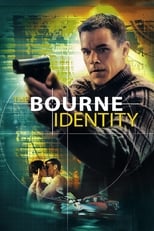 Release: Jun. 14th, 2002
Runtime: 1 hour, 59 minutes
Wounded to the brink of death and suffering from amnesia, Jason Bourne is rescued at sea by a fisherman. With nothing to go on but a Swiss bank account number, he starts to reconstruct his life, but finds that many people he encounters want him dead. However, Bourne realizes that he has the combat and mental skills of a world-class spy—but who does he work for?

4 The Bourne Identity
a new matt damon movie- no not ocean's 11, but a action thiller. thats the trailer, i thought it looked good, exciting, and i like the fight scenes, also i really like matt damon. I think this mo...
0 The Bourne Identity
The Bourne Identity will be released on January 21st in separate 2.35:1 anamorphic widescreen and pan & scan versions. Each release features Dolby Digital and DTS 5.1 surround tracks, an audio com...
5 The Bourne Identity
I know you guys over here have probablies reviewed it already but i have my own personal oppinion of it here, i know its gonna sound weird but its one off my site so keep with it The Bourne Identi...
1 The Bourne Identity
Has anyone seen this yet? I was able to attend a special showing in Chicago before it opened and Matt Damon was there to promote it. I enjoyed the movie..I liked it more than Mission Impossible be...
9 The Bourne Identity
This was a very great spy thriller. The best part was Doug Liman(Go, Swingers)'s directing, the story was a bit hard to follow at times. Matt damon was great, he got really really buff for this par...

Fabulous A nice sidekick named Marie (Franka Potente), turns out to be a nice change of pace and a pretty good dynamic to Bourne.
READ REVIEW

Omnizoa I know I've at least seen one full Bourne movie and bits of others, but I don't think I've seen Bourne Identity.
READ REVIEW

Gideon58 I was initially bothered by the fact that we never really learn exactly what agency Bourne works for but once, Bourne's original target is eliminated, it really becomes irrelevant and we're completely caught up in the cat and mouse game of Jason trying to remember what happened to him and this agency trying to make him forget.
READ REVIEW
View All (5)