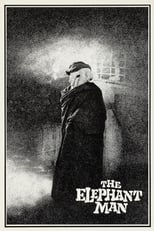 Release: Oct. 2nd, 1980
Runtime: 2 hours, 4 minutes
A Victorian surgeon rescues a heavily disfigured man being mistreated by his "owner" as a side-show freak. Behind his monstrous façade, there is revealed a person of great intelligence and sensitivity. Based on the true story of Joseph Merrick (called John Merrick in the film), a severely deformed man in 19th century London.

Captain Spaulding Philips cathedral, obscured but for a solitary spire by a brick wall outside Merrick's window -- and which Merrick, both in the film and in real life, built an impressive model of by relying on his imagination -- symbolizing the beautiful soul obscured beneath the disfigured body.
READ REVIEW

Iroquois When it comes to any film that's made in the era where colour cinematography is the widely available and accepted norm, any film that can not only make it work but feel essential to the film as a whole has to be impressive; if you have to seriously struggle to think of this film in colour (much less....
READ REVIEW

Citizen Rules This is a movie and movies are art, and as such uses the craft of the film maker to capture the essences of the man they called an Elephant Man.
READ REVIEW
View All (5)