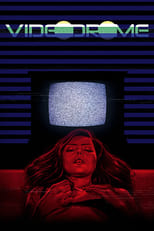 Release: Feb. 4th, 1983
Runtime: 1 hour, 27 minutes
As the president of a trashy TV channel, Max Renn is desperate for new programming to attract viewers. When he happens upon "Videodrome," a TV show dedicated to gratuitous torture and punishment, Max sees a potential hit and broadcasts the show on his channel. However, after his girlfriend auditions for the show and never returns, Max investigates the truth behind Videodrome and discovers that the graphic violence may not be as fake as he thought.

We didn't find any linked discussions for this film. Here are the results of a quick search of possibly related threads:
11 Videodrome vs. The Fly?
As expected, my past poll of Terminator 2 vs. Aliens gave an edge to the former. After I sent in my list for the Top 100 I watched Videodrome. This movie has several similarities to The Fly: Both ...
8 Videodrome Remake
All I can say is, "Oh, hell no."...
8 do you think videodrome is one of the best surrealist films ever?
i loved this movie since the first scene, it felt weird, intriguing and mysterious, it was visually impressed with this gore, weird and bizarre movie, He was able to foresee the importance of televisi...
7 Can't recall the name of a movie similar to Videodrome?
I saw this when I was a kid, so this is all I can recall. It was B-grade horror film, mostly from late 80's or early 90's. It was about a Videotape.. and something to do with the army. I can't exactl...

Sexy Celebrity The era of videotapes may be over, television may have been replaced with the internet, but the message of this movie -- or, at least, the intent -- is still relevant and still vital and [i]Videodrome[/i] does not disappoint almost 30 years after its release..
READ REVIEW

Iroquois A lot of credit for what makes Videodrome such an outstanding film has to go to the legendary Rick Baker, who provides some excellent practical effects that convey the extremely visceral ways in which Videodrome starts to affect the people who are exposed to it.
READ REVIEW

TheUsualSuspect Cronenberg is one of those directors that is talented enough to make a bizarre film not seem too out of control.
READ REVIEW
View All (5)