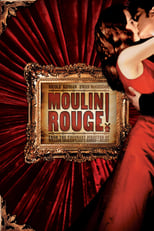 Release: Mar. 9th, 2001
Runtime: 2 hours, 7 minutes
A celebration of love and creative inspiration takes place in the infamous, gaudy and glamorous Parisian nightclub, at the cusp of the 20th century. A young poet, who is plunged into the heady world of Moulin Rouge, begins a passionate affair with the club's most notorious and beautiful star.

We didn't find any linked discussions for this film. Here are the results of a quick search of possibly related threads:
12 Moulin Rouge
WOW!! I just saw this movie on Friday and I was blown away. I have never seen a film like this before. Just the first 10 minutes are so amazingly beautiful that I had this big smile on my face the ...
2 Moulin Rouge
Okay, so this is the film that revitalized the musical movie, right? It brought us Chicago, Hairspray, and Sweeney Todd, among many other similar products. Does it mean the original is worth the prais...
1 Moulin Rouge!
God, I find this movie annoying. Nominated for several Oscars for whatever reason, it uses every tired romance plot, every tired line, and is mess when it comes to its editing. The romance is cheesy, ...
34 moulin rouge
did you like this movie? did you fall inlove with it?...
6 Moulin Rouge
I LOVED MOULIN ROUGE!!!!!!!!!!!!!!! Ewan McGregor is Sooooooo Yummy!!!! Anyone else have thoughts on that?...

JayDee The standout moment would probably have to be the 'Elephant Love Medley' which features McGregor and Kidman atop a stunning elephant statue, trading lines from classic love songs back and forth; utilizing the likes of All You Need Is Love by the Beatles, In the Name of Love by U2 and Heroes by David....
READ REVIEW

Iroquois I have somehow never managed to watch a Baz Luhrmann film in full before, and Moulin Rouge.
READ REVIEW

mastermetal777 Few things come together in this film, like the dance sequences and the slower scenes with character development. Other than that, this film is frenzied, confused, and otherwise forgettable..
READ REVIEW
View All (4)