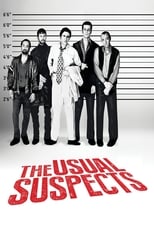 Release: Jul. 19th, 1995
Runtime: 1 hour, 46 minutes
Held in an L.A. interrogation room, Verbal Kint attempts to convince the feds that a mythic crime lord, Keyser Soze, not only exists, but was also responsible for drawing him and his four partners into a multi-million dollar heist that ended with an explosion in San Pedro harbor – leaving few survivors. Verbal lures his interrogators with an incredible story of the crime lord's almost supernatural prowess.

We didn't find any linked discussions for this film. Here are the results of a quick search of possibly related threads:
3 The Usual Suspects?
Is this on DVD? I just saw it, and enjoyed it quite a bit. The kind of movie I'd *love* behind the scenes info on. ...
29 Just Saw the Usual Suspects
jeesus christ (spoilers?) that thing at the end, the first twist, I thought that was it! I had no idea about the second twist, that was amazing ...
3 Usual Suspects ending
just curious on everybodys theorys to the ending of this film........
1 Usual Suspects re-release
Read on that MGM is gonna be releasing The Usual Suspects Special Edition on April 2nd. The disc sounds pretty good, with commentaries, featurettes, and finally the deleted scenes which the actors ...
7 Usual Suspects and Office Space
I actually heard these two titles are coming out again in better transfers and more extras before the year's end! Any truth to this?...

MovieMeditation Because, in reality, this story isnt about what happened or what is about to happen it is a story about what is happening and what hasn't even happened at all.
READ REVIEW

Iroquois Even though I had somehow ended up reading the entire screenplay for The Usual Suspects (which spoiled its big twist in the introduction anyway) before actually seeing the film, I still liked it enough to consider it a major favourite back in the day.
READ REVIEW

Gideon58 Stylish and intense direction, a compelling, multi-layered story, and a terrific ensemble cast combine to make The Usual Suspects one of the best films of 1995.
READ REVIEW
View All (7)