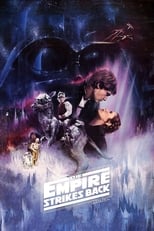 Release: May 20th, 1980
Runtime: 2 hours, 4 minutes
The epic saga continues as Luke Skywalker, in hopes of defeating the evil Galactic Empire, learns the ways of the Jedi from aging master Yoda. But Darth Vader is more determined than ever to capture Luke. Meanwhile, rebel leader Princess Leia, cocky Han Solo, Chewbacca, and droids C-3PO and R2-D2 are thrown into various stages of capture, betrayal and despair.

We didn't find any linked discussions for this film. Here are the results of a quick search of possibly related threads:
7 The Empire Strikes Back
THE EMPIRE STRIKES BACK (1980) Due to the unforeseen success of 1977’s epic space adventure ‘Star Wars’, creator George Lucas was able to continue work on what he originally set out to achieve; a...
28 Empire Strikes Back, Weak 3rd Act
ESB might be most people's favorite (including mine) but ANH is the better crafted film. The 3rd act of ESB was botched as well as some other parts. Most everything is fine until Han and Leia are t...
2 The Empire Strikes Back 35th anniversary
It's been 35 years since one of the greatest sequels, sci-fi and fantasy epics of all time hit the big screen. My big brother saw it on the big screen at age 6 and loved it as he and my mom had tho...
82 'Star Wars' from the perspective of the Empire???
Each of the four (decent) films and the cartoons that comprise the 'Star Wars' story tell that story entirely from the perspective of the unified political/religious forces that is the Jedi/Rebel Alli...
3 Star Wars Episode IX (Episode 9)
I figured since the Episode VIII thread has been already made, why not get this one started...since news has been released anyways. Heroic Hollywood has broke the news that Colin Trevorrow is bee...

The Gunslinger45 I dont know how many times I have watched these movies, but it has to be well over 100 times by now.
READ REVIEW

Cobpyth The Empire Strikes Back is rightfully considered the best film of the whole Star Wars series and contains arguably one of cinema's top 5 most famous scenes of all time.
READ REVIEW

JayDee Film Trivia Snippets - Even though The Empire Strikes Back is generally regarded as the darkest entry in the Star Wars series, with just 30 deaths it actually has the lowest body count of any film in the saga.
READ REVIEW
View All (11)