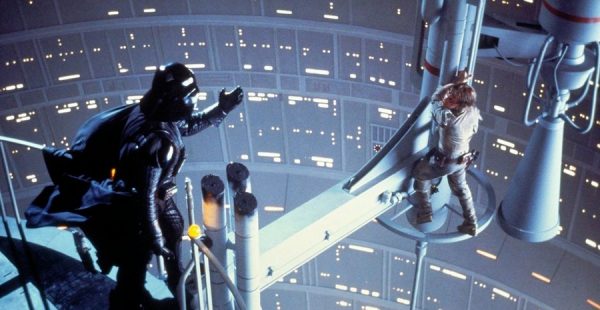 Like many others, I believe this is the best film that came out of the most popular sci-fi film series of all time. I've seen it countless times and keep enjoying it over and over again. The script (the dialogue and the plot) is a stroke of genius and of course it also has the charm and sheer entertainment-value of the whole Star Wars universe and all of its awesome characters and original ideas.

If there ever was a twist in film history that I would want to revisit live at its original release, it would probably be the "I am your father"-twist of The Empire Strikes Back. I can't imagine what the reaction must have been in the theaters back then. It's one of the greatest and most haunting climaxes ever.

This is also the film where the 'love relationship' between Han Solo and Princess Leia starts to develop and while some people might find it a little cheesy, I think it's one of the most hilarious and yet sweet and charismatic relationships ever depicted on film. Their scenes together are just perfect.

We are also introduced to the character of Yoda for the first time, who is still one of the most respected film characters ever. A green little muppet became a symbol of wisdom and inner strenght for millions of people.

The Empire Strikes Back is rightfully considered the best film of the whole Star Wars series and contains arguably one of cinema's top 5 most famous scenes of all time. A classic for the ages and one of my all time favorite films!