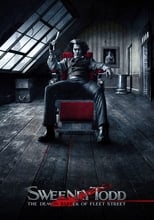 Release: Dec. 20th, 2007
Runtime: 1 hour, 56 minutes
The infamous story of Benjamin Barker, a.k.a Sweeney Todd, who sets up a barber shop down in London which is the basis for a sinister partnership with his fellow tenant, Mrs. Lovett. Based on the hit Broadway musical.

We didn't find any linked discussions for this film. Here are the results of a quick search of possibly related threads:
12 Sweeney Todd: The Demon Barber of Fleet Street
In this great musical movie, i want to know something about it.. Why did Sweeney Todd start killing all these innocenet people on his barber chair?? thank you...
83 Sweeney Todd: The Demon Barber of Fleet Street
Yoda PM'd me, saying that I should review this film, that "there's a big ol' spot on the mainpage" for me. Wanting all the glory, I jumped on the bandwagon. For the record, I general...
59 Attend the Tale of Sweeney Todd...
His lip was pale and his eye was odd. And what if none of their souls were saved? They went to their Maker impeccably shaved... Coming this Christmas, a story that has always had Tim Burton w...
21 Depp in "Sweeney Todd"
I think the combination of Depp, Burton, and SWEENEY TODD (one of my personal favorite musicals!) is making me giddy! Depp to Star in Burton's 'Sweeney Todd' LOS ANGELES (AP) - Johnny Depp is...
2 Barber Shop 2
Just wondering if anyone's seen it yet, I can't find very many reviews on it, I loved the first one, and wondering if this one is worth paying 8 bucks for....

SamsoniteDelilah The art direction is really wonderful. The palatte of drab stark contrasts and occasional flashes of red, red blood are beautiful and create an otherworldly ambiance..
READ REVIEW

Thief Yeah, Sweeney Todd won't end up among my all-time favorite films, or not even my favorite musicals (I think?), but it was sure damn fun to watch.
READ REVIEW

Thursday Next I enjoyed the comic aspects, especially Todd sitting sullenly at the beach in Mrs Lovett's fantasy song, and wished there could have been a few more to lift the gloomy melodrama..
READ REVIEW
View All (5)