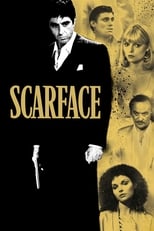 Release: Dec. 8th, 1983
Runtime: 2 hours, 50 minutes
After getting a green card in exchange for assassinating a Cuban government official, Tony Montana stakes a claim on the drug trade in Miami. Viciously murdering anyone who stands in his way, Tony eventually becomes the biggest drug lord in the state, controlling nearly all the cocaine that comes through Miami. But increased pressure from the police, wars with Colombian drug cartels and his own drug-fueled paranoia serve to fuel the flames of...

We didn't find any linked discussions for this film. Here are the results of a quick search of possibly related threads:
30 Do You Like Scarface?
I just want to know people's opinion on this film. I know there are some who don't like it on this site and some who love it. I'm in the latter catergory and I consider it to be Brian De Palma's best ...
5 Not Scarface? What's this movie?
There's a specific scene I can remember but I have no clue what movie it's from. I thought it was Scarface all this time, but I JUST finished watching it a few minutes ago and the scene wasn't in the ...
1 Scarface reboot
"Call Me By Your Name Oscar nominee Luca Guadagnino is now set to direct Universal Pictures’ reimagination of Scarface. The new movie will be set in Los Angeles. The pic’s shooting script w...
17 Scarface or Carlito's Way
Honestly, is there anybody who prefers Scarface? I know it's the more famous of the two among the mainstream, but personally, I don't feel it's close. I feel Carlito's Way is better by a wide margin. ...
11 The Godfather vs Scarface?
This week on my podcast, we talked about which film is better. Look us up on youtube under BZR's Cinema Addicts to find out what we think. What film do you guys think is the better one?...

Thursday Next Is Scarface the ultimate eighties movie? As trashy and flashy as a Duran Duran video, Brian De Palma’s remake of Howard Hawks’ 1932 gangster classic certainly captures the fabled ‘greed is good’ mantra of the eighties..
READ REVIEW

TylerDurden99 Like The Untouchables, I really don't have much else to say about this film, except that it's the most iconic film of the '80's decade.
READ REVIEW

KeyserCorleone Anybody who wants a typical great gangster movie should check this out, but I warn you: Tony Montana is a dick the size of a flagpole.
READ REVIEW