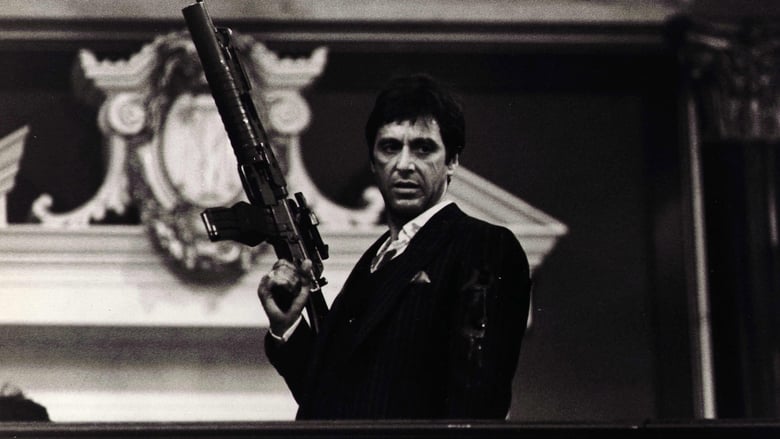 "The world is yours!"

I easily find myself attracted to gangster movies, not for the violence or for the plots, but for the retribution and comeuppance of those that commit these terrible acts of violence and deception. I think one of the greatest examples of characters that get these in the end is without a doubt Tony Montana, A.K.A. Scarface.

In the loose 1983 remake of a classic 1930's gangster flick, Scarface centers around Tony Montana, a Cuban immigrant who's hiding away from Fidel Castro in Miami, Florida. As Montana rises up the ranks of gangster-hood, he becomes further set about from the world he claims to own, and puts those he loves but doesn't trust in more danger. And the world he owns will betray him after he breaks a taboo among gangsters: he got high on his own supply.

I saw this classic Brian De Palma film (and the first of his movies I've seen) because I've heard mixed things about it. And though I don't deny it's classic status, I believe it's a fair bit overrated. The movie has a lot of strong points and iconic scenes, so it's a hard movie to complain about. But those that see its problems might see scars on the face of the movie as well as Al Pacino.

I'll start with the strengths. First strength: Al Pacino's acting. I always expect a good job from Al Pacino. Ever since I first viewed The Godfather and his role as Michael Corleone, I never considered he'd do a bad job in a gangster movie or a drama. So far, I haven't been dissappointed. The other actors were mostly good, but since the movie focused on Tony Montana, there wasn't a lot of room for most of the cast, even Michelle Pfeiffer.

Second strength: Brian De Palma's direction. There wasn't any flaw in his cinematography. Every scene was perfectly placed, starting from the beginning to the dramatic end. I expected that, to be honest. Brian De Palma is a classic director, and many consider this his best movie.

Third strength: The plot. Watching Tony Montana's character shift from a caring person to a total ass is an interesting evolution when you look at the way he affects the world around him. Plus, one interesting thing after another just keeps punching the audience in a powerful manner.

Fourth Strength: The quotes. There are a lot of fantastic quotes about life, the world, gangsters, etc. I would watch this movie again just for the quotes alone.

Fifth strength: The sets. Gangster movies need great sets. Without them, they feel more like a typical crime movie. It's rare to have a fantastic gangster movie with minimal sets, like Reservoir Dogs. The mansions in this film are beautiful, and the Florida scenery is phenomenal. It's a beautifully filmed movie with beautiful places. And these strengths encompass some of the most important things in filmmaking in my eyes, so I'll still give it a high rating.

Now I'll go into the cons. First con: The f-bombs. I know I just praised the quotes, but I never said the dialogue as a whole was perfect. Even Pfeiffer asked him if he could stop saying that. It's hard to appreciate most of the dialogue of the central/titular figure when every fifth word's the f-bomb. It gets very tiresome very quickly.

Second con: The soundtrack. I'm sorry, but I just don't think a gangster drama needs a Giorgio Moroder soundtrack. I understand it's an 80's movie that's set in the... 80's, but this is Scarface, not Footloose.

Third con: The character development. This isn't like The Godfather where the world around the central figure affects him and evolves him, because then you can get away with little to know character development, in part because of careful foreshadowing. This is about Tony Montana affecting the world around him, and the characters don't get a lot of screen time in comparison to him. Some of them are generic. For example, Gina is a stereotypical irresponsible little sister who gets a little annoying. What really sets Sosa aside from other gangsters?

Fourth con: I don't like Tony Montana. Shouldn't the main character be a bit more likable? He starts out as a little bit of an ass, but he jut gets worse and worse! If I want to spend three hours with a guy the movie places too much emphasis on, I'd at least want to feel like I can have a beer with him.

Well, overall, Scarface is a great movie. But for a first-time view, I CANNOT call it five-stars at all. Tony himself was a bit of a scar on the movie. But at least the rest of the surface is pretty enough to enjoy a fine gangster movie. Anybody who wants a typical great gangster movie should check this out, but I warn you: Tony Montana is a dick the size of a flagpole. He might want to live the American Dream, but he certainly was not a dream come true. But it has some wonderful strengths which rival that of Coppola and Scorsese films, so there's that.