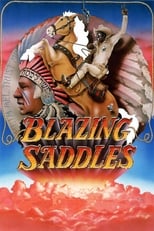 Release: Feb. 7th, 1974
Runtime: 1 hour, 33 minutes
A town—where everyone seems to be named Johnson—stands in the way of the railroad. In order to grab their land, robber baron Hedley Lemar sends his henchmen to make life in the town unbearable. After the sheriff is killed, the town demands a new sheriff from the Governor, so Hedley convinces him to send the town the first black sheriff in the west.

We didn't find any linked discussions for this film. Here are the results of a quick search of possibly related threads:
1 Blazing Saddles Review
O.K. This is my first time reviewing, I hope I do well. Tell me my errors please.Thank you.(Sorry if the picture isn't there it should be but I'm not very computer literate and this computers kinda ol...

TheUsualSuspect I see many films ripping it off (fart jokes began here) yet I've seen those films first, so what's funny to me here I've already seen.
READ REVIEW