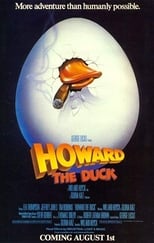 Release: Aug. 1st, 1986
Runtime: 1 hour, 50 minutes
A scientific experiment unknowingly brings extraterrestrial life forms to the Earth through a laser beam. First is the cigar smoking drake Howard from the duck's planet. A few kids try to keep him from the greedy scientists and help him back to his planet. But then a much less friendly being arrives through the beam...

20 Is Howard The Duck really all that foul or bad?
I just need to know if you can analyze the badness of the film on what made the film bad! Please i would like to know. Why did it flopped? and why did George Lucas disowned it? Can you compare t...
4 Howard the Duck Special Edition DVD
STREET DATE : March 10, 2009 S.R.P.: $14.98 AUDIO: • English Dolby Digital 5.1 Surround • French Dolby Digital 2.0 Stereo • Spanish Dolby Digital 2.0 Stereo SUBTITLES: • En...
4 Does anybody want to see a Howard The Duck movie with Seth Green?
What's interesting about the Guardians Of The Galaxy movies is that in both of them, Howard The Duck has made a cameo. He hadn't been brought back to the screen in almost 30 years. And I think we all ...
11 Howard The Duck to be re-issued in theaters next year!
i've heard George Lucas is planning on making his famed flop " Howard The Duck" into a special edition featuring a CGI altered Howard to make him look like a real duck than a Midget in a Duc...
10 Was Howard The Duck suppose to be based off Richard Dreyfuss?
I watched a bit of the 1986 movie cause my gf wanted to, then I lost interest and didn't finish it. I couldn't help but notice that Howard talks and sounds just like Richard Dreyfuss. He even looks ...

Citizen Rules A PG movie with adult type jokes, but with a cutesy duck talking duck creature that would seem to be suited to a kid's movie...Throw in more CG special effects and FX stunts then 5 other movies combined and you get one weird movie.
READ REVIEW

meatwadsprite It's also appropriate to watch with your kids because a fully grown woman tries to have sex with a duck, then he gets a funny duck erection when his hair goes up.
READ REVIEW