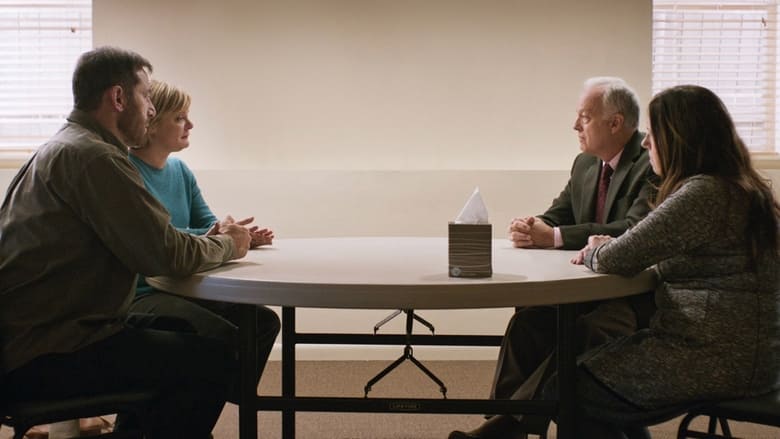 by mattiasflgrtll6
posted on 2/12/22
in
THIS REVIEW CONTAINS SPOILERS THROUGHOUT.

Sometimes when tragedy strikes we don't know how to react. Is the appropriate reaction anger? Sadness? Hopelessness? Or a mix of all three? We are shown two sets of parents, the first pair (Jay & Gail) belonging to the son who got shot and the other (Linda & Richard) to the son who killed him. Both are obviously trembling with pain and traumatic feelings from the event, but because they are on the opposite side of the debate can't seem to find a common ground.

The conversation starts off in a civil manner, if only on the surface. They are trying to create a good atmosphere so when they finally start talking about the subject they gathered there for it won't be so hostile. But it's clear very early on that there's too much hurt and explosiveness hidden underneath for things to proceed neutrally.

Linda considers showing pictures of her son (The shooter), but changes her mind and shows a jar full of paper frogs he made instead. This hesitation demonstrates that she knows she is walking on thin ice already, but by pulling up the jar is still being direct with not wanting to hide the love that remains for Hayden. This love is eventually what catapults into the conversation becoming especially heated.

Is it fair to expect some form of revenge for your child getting killed? Should the parents of the killer blame themselves for not raising him correctly or neglecting the signs, even when they couldn't have possibly seen the whole picture? The way these questions play out is fascinating as often as it is gutwrenching. Jay starts off as the openminded one while Gail is more sceptical.

But the tables turn when Linda and Richard dismiss any claims of being aware of Hayden's psychopathic tendencies, and even disregard the accusation that he was a psychopath at all. Richard takes particular issue to Jay's angry questioning, and repeatedly states over and over that Hayden seemed to be doing fine and that he was simply lost and confused. This is interesting since before Jay starts losing his patience Richard mournfully said it was his fault his son became a murderer in the first place. It shows how suddenly your mind can switch over to the line of defense when you feel your integrity getting scrutinized.

Linda takes a very different approach. She's probably the only one of the four who never gets legitimately angry, and tries as best as she can to understand the other point of view. She even beats herself up not seeing the signs through Hayden's behavior earlier. How can you piece together an image of someone you held so dear when they did something so unimaginably horrible?

Jay continues to get angrier and angrier, to where he seems only seconds away from throwing a punch, until he breaks down in tears remembering the details of Evan's death. I love how the audio starts fading out as his pain becomes more unbearable to handle, which is how most of us can feel when our minds are stuck in a black void with seemingly no light in sight.

From there on though the atmosphere changes yet again. Having exhausted themselves from yelling and back-and-forth blaming, they are all just too tired to get upset anymore. They start to realize they are not really mad at each other, they are just mad at the pain and suffering that seems to go around in a neverending cycle. Gail is worried that her son's death wasn't even meaningful since the violence that lead to it still goes on.

Linda inquires Gail to share a fond memory of her son Evan. Jay fails to see the point of it, but she agrees. As she starts telling the story we see her face brighten up for just a moment. Reminiscing about Evan's life instead of his death brings a nostalgic glimmer to her eye, almost like she gets transported back in time. But when we think about the past we often have an arm stuck in the present, so this cherished memory manages to become painful too. Gail's voice cracking as she recalls the tale had me on the verge of tears. The mixture of happiness and anguish feels all too real.

Being thankful for her son being in her life at all instead of feeling angry about his death is what gives Gail the strength to forgive the other couple. There's nothing that can bring her son back, so what could vengeance possibly mean to her? Her compassionateness makes Jay relent as well, and understands that maybe he judged them too brashly.

Oddly enough I think Richard is the one who is gonna have the hardest time letting this go. At the end he's friendly just like the other three, but feels very eager to leave as soon as possible. Maybe he's not quite sure yet if he's processed all that has taken place and needs more time to think.

Linda on the other hand sticks around for longer and comes back to tell a story about Hayden. Unlike Gail's, this one isn't nostalgic or happy at all, but rather a recollection of the most suspicious behavior she saw him display. The regretful look on her face when she says she wishes Hayden would have hit her after telling her to leave him alone almost broke me. She might never fully come to terms with who her son really is, and is trying to apologize for not paying more attention to the way he was changing.

Religion also plays a role. When Jay intently starts listening to a church choir singing upstairs, he gets filled with the spirit of forgiveness. It gives a momentary peace of mind in his heart, like everything is going to be okay in spite of what has happened. When Gail starts holding his hand I also feel the bond between them strengthening. They are no longer bound by the loss of their son, but instead by the love that made them connect with each other in the first place. A beautiful way to end the movie.