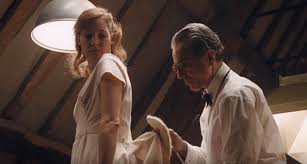 What can I say about Paul Thomas Anderson that I haven't 100 times already. You know you love a director when his last film is one that you watched 4 times in two years, gave a 4/5, and put in your top ten of the year, yet somehow you feel underwhelmed by it. I was more than ready to fully embrace another PTA film and Phantom Thread did not disappoint.

Immediately I feel transformed into the world PTA has created for me. The soft grainy palette and the way the camera glides wraps me in and never lets me go. Greenwood's score is wonderfully different from his others but somehow the same as well. I love how front and center the piano is here. It sets a romantic tone. There is still a subtle harshness that existed in There Will Be Blood and The Master as well. Music always plays a heavy role in PTA's films and this just might be the best score yet.

The aesthetic is pleasing. I think most of us think of PTA and we think of Los Angeles. He has proven his eye for framing extends to period pieces and western vistas as well. Here he is working mostly within lush upscale London interiors. Every setting is beautiful to look at. Costume design plays an important role here and despite myself I really admired not only the well designed dresses but the way Lewis's character is dressed as well. He is always put together perfectly with one exception that is used to great comedic purposes.

The quality of the performances can't be over stated. PTA is one of those directors that always seems to get the most out of actors. I find myself both excited and disappointed that this may be Daniel Day Lewis's final film. He is astounding as Reynolds Woodcock. There really isn't a way to put into words what he is doing here. Every glance, smirk, and sigh matter and demand your attention. He is every bit as good as he was as Daniel Plainview. As great as he is he never dwarfs Vicky Krieps or Lesley Manville.

Krieps plays Alma who is the woman that Woodcock makes his muse. Similar to Phoenix in The Master she needs to feel the equal of Woodcock in order for the dynamic of the story arc to work. She does that and it makes her staying with Woodcock believable which is essential for the story not to fall apart.

Manville plays Woodcock's sister Cyril. She has a very tough job as well. She is a refined aristocrat who must come across as Woodcock's assistant but also his equal. Cyril is a wonderfully written and performed character who shares in many of the films most pivotal scenes. All three of these performances are getting critical acclaim as they should. It would be nice to see them get some love at Oscar time.

As with most directors who consistently get great performances from their actors I think what makes Phantom Thread special is the script. I really feel that some of the people who found The Master frustrating despite the great performances will find more to love here. It is a straight forward story with scene after scene of great relationship building and confrontation. That doesn't mean it is without its mystery though. What I think PTA always does masterfully is give you just enough character to keep you wanting more. I always feel like I am just another scene away from figuring out everyone's inner most intentions. I never get there though. Always left wanting just a little bit more to help me fully grasp the themes and humanity of his story.

I really love the last third of this film. The story arc seems so simple for so much of the film that I found myself wondering how exactly PTA would wind it up in a satisfying way. There is a turn that I think very few will see coming and it makes a perfect film even more perfecter. 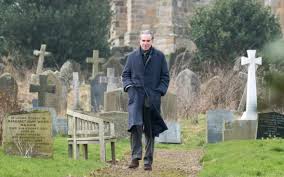