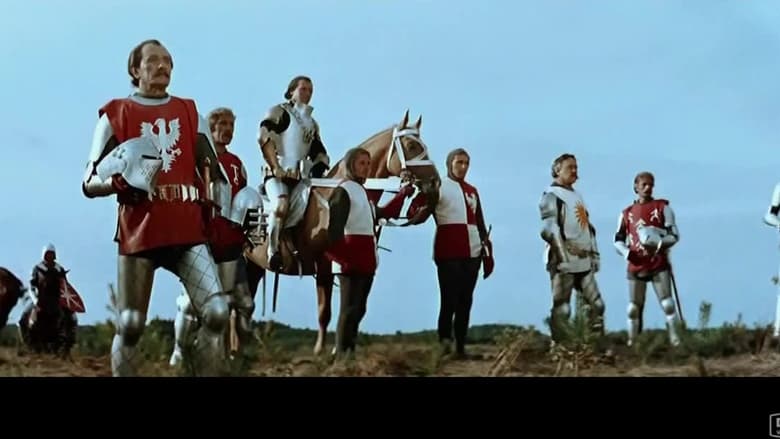 Knights of the Teutonic Order

Knights of the Teutonic Order (1960)
I've heard this movie described as the greatest film of all time. It certainly is a masterpiece. This movie was so good it gave me chills. It felt like Robin Hood if they had tortured maid Marian to death. Whenever I watch movies set in medieval times with knights, I want to see grand battles, maidens and heroism, but not in a cheesy way. I don't want Lord of the Rings fantasy flash. No, because reality is better than fantasy. You can't improve knights and war with magic and dragons. This movie delivers exactly that, and everything I ever wanted of it.

A grand epic tale to rival the Hollywood blockbusters of its time. As charming and elegant as this movie was it also had a visceral level of realism. At times there was tremendous beauty, but it was equally uncompromising in showing the ugliest sides of life. The scope of characters was quite broad, but if you focus on the main players it shouldn't be too confusing. At 2 hrs and 40 minutes it was a satisfying length. The pacing was a little bumpy though. I had a very nostalgic feeling throughout the movie. It brought me back to my childhood. I saw a movie called Lionheart, but I didn't remember the title. The strong impression I had of the knight in battle and riding on forrest roads in armor. When I found the movie as an adult it turned out to be a bit of a mediocre movie. But I still longed for that sensation. Finally after all these years I have tasted that sensation again. It even managed to make me cry a little.

This Polish film is legendary in status among the few who are aware of its existence outside of Poland. Based on the novel of the same name by Henryk Sienkiewicz, the story was about the Polish-Lithuanian-Teutonic war and was designed to inspire nationalism in the Polish people. It reminded me of The Princess Bride in terms of its graceful charm and the scope of its adventure, but willing to drag its characters through the mud and let them drown in the swamp or be hung hauntingly from gnarled tree branches like the victims of some wicked witch. It reminded me of Doctor Zhivago with its long tragic filled story and sympathetic characters. This film is a must see for everyone, I highly recommend it. It's classic cinema, a beautiful masterpiece!