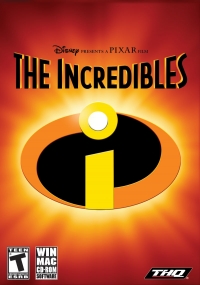 “That was totally wicked!” I mean, who could have known that on top of a movie experience lost at sea with me attempting to rescue back my love for ‘Finding Nemo’, a movie called ‘The Incredibles’ would come straight down fast and fiery from above and slam me senseless into the water right after it exploded directly in my face! I don’t even know what I was waiting for… something amazing, I guess? And oh, boy did I get just that!

This film was always fun, for sure, and I remember loving it back in the old days as pure powerhouse of entertainment, though now as an adult the little more subtle details are what sets this movie apart. I guess the emotional core, which usually makes you a crybaby when we reach the climax, is what many have come to expect from Disney and Pixar – myself included – so when this movie aims for something else I left the movie several times unable to appreciate the undertones of larger themes. In a lot of ways, this is Disney’s best portrayal of family and togetherness yet, because the superhero element is used to enhance these themes, not merely the action set pieces.

And the balance of life is something we all struggle with to some extent, which ‘The Incredibles’ shows incredibly well, by using the superhero in hiding, attempting to be ordinary, to help tell that part of the story. Also, the whole deal about identity. Dash’ trouble at school and wanting to compete in sports and be social and do something that may also help him stay motivated and interested, so he doesn’t take it all out in school. Some clever ADHD vibes going on here too. Violet and her “invisibility” is obviously not just a random superpower the writers gave her. Her character is this insecure person, hiding in plain sight, acting as a lot of teenagers do too. And the mother “stretches” herself to keep things together and doing a thousand things at the household at once, while the father is living a life in the past, building up all this anger and unresolved emotions.

Overall, the family aspect just hits home, especially when Mr. Incredible says to his wife “No. I’m not strong enough” emphasizing that without her and the family he is weak and all those muscles amount to nothing. I have to be honest, the power of those words never felt as great as they did this time around. Just all these things about family and identity and all that really is well done. And “my parents are my superheroes” never rang truer than this. Oh, and Brad Bird as Edna Mode… Brilliant!

And hey… talking about family, how about that spoiled little brat who may actually not have had the greatest childhood? Actually, I used to think he was a weak villain. He still isn’t a favorite, but he liked his character and motivation more this time. In a way, he is merely a fanboy who was let down by his hero, then growing up in anger and hatred, wanting to show his worth and be the best, but doing so by removing all who may intervene and stop him from succeeding, only to realize he will never be able to be or do what a real superhero does, which is then shown with karma coming back to bite him after he gets defeated by his own making and his own uncontrollable ego and power-dream crashing down upon him.

Sure, in broad strokes, this might sound as something we have seen before, but the execution makes it seem like so much more. He is a twisted little pyscho for sure, but there is a broken boy behind that mask – actually simply a human behind that mask – who hides behind his creations and while the real superheroes try their best to be ordinary, the ordinary in this case tries his best to be super. But he can never be what someone else is and his power-hungry dream sucks the life out of him – literally at one point actually...

Ultimately, this is a great homage to the superhero and action genres, which is beautifully held together by a strong bond of togetherness and spiced up with stunning visuals and a breathtaking audio experience – seriously, I have said it before, Disney/Pixar has some amazing sound design and mixing (oh, it won an Oscar I see now). The DTS track on ‘The Incredibles’ blew me away, especially the scenes with Dash running and the robot scenes filled with earthshattering bass. And the score is amazing, jazzy yet upbeat and thematically heroic. Anyways, this movie is a super-fun time with superheroes, super villains and slick gadgets, but the connection we all make no matter the superficial surface, is to the characters who are no more super than we are, when it all comes down to it. They deal with the same stuff we do and in a way… we are all superheroes…