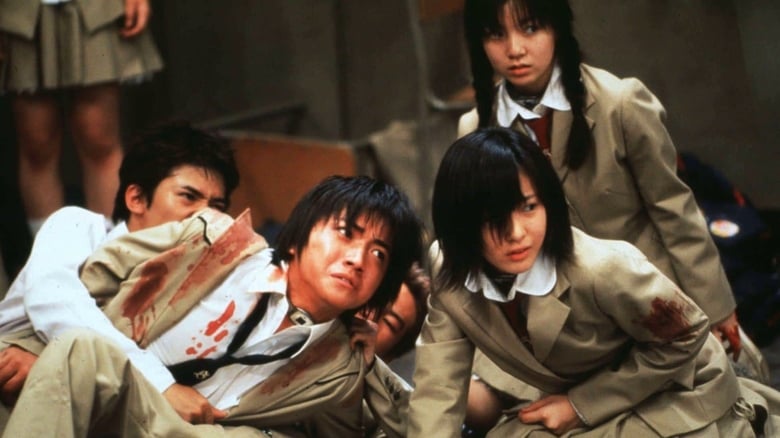 
Let me quote a famous and respectful philosopher first:

The children now love luxury; they have bad manners, contempt for authority; they show disrespect for elders and love chatter in place of exercise. Children are now tyrants, not the servants of their households. They no longer rise when elders enter the room. They contradict their parents, chatter before company, gobble up dainties at the table, cross their legs, and tyrannize their teachers.

Sound familiar? This is something what Socrates said in 400 BC. Youth has been always rebellious. It's been always the same not different. For centuries famous philosophers and teachers were suggesting methods how to deal with youth rebellion, how to educate them but it has never concluded in murder. And I'm talking about insane guys like Jean-Jacques Rousseau. Saying this I found Battle Royale utterly useless and pointless movie.

The movie is set in the future Japan with the premise that government faces a very serious issue of unemployment and 800 thousand students feel there is no future for them and start the rebellion against authorities. Of course the school teachers are the first target of angry youth only to get disrespected, mocked and demeaned. I don't mind the topic of this movie because we will never stop to wonder how many great things a youth rebellion brought to any society. Just see a modern history of your country when adults keep silent and students went to streets to bring up the issue. However let's see the solution of Japanese government in this movie. As a measure to push back the rebellion once a year they randomly choose 40 9th graders and bring them to a deserted island 10 km in diameter. They are all surrounded with armed soldiers and a teacher from their school is a lead of the operation. They put irremovable necklaces to measure their vital signs, to track them and to listen. The soldiers distribute to each of them water and some rations and each student receives one piece of weapon starting from a paper hand fan to a machine gun. They tell them through this cool female moderator on TV that they have 3 days to kill one another until one student left and if there is more than one student left they all die detonating the necklace. Now my problem with this is:


This is widely considered as a cult movie and pretends to send a message however I don't see any message to anyone. All I see is some minor paperback that you buy at the airport for 2 bucks to spend your flight by reading a garbage that you don't have to much reflect about and then just toss it to a waste bin or leave it behind on your seat and ever forget about it.
I don't want to be only trashing this movie so I must say that some of the acting was top notch, cinematography was good, camera was fine and soundtrack was fair. And of course the whole idea was very different and interesting but they should make it like a comedy slasher and not trying to impose some deep thought to viewers. All I can say, as always, I respect other opinions but I cannot rate this movie more than 2/5.