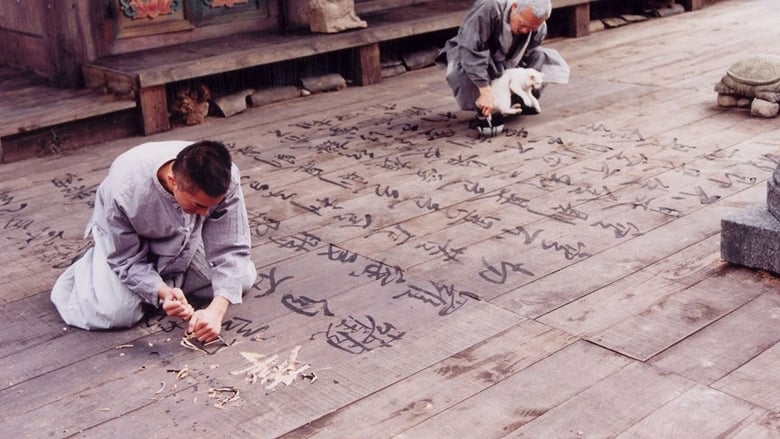 
We observe the life of two saints (please note we don't know the names of the two Buddhist monks as it is utterly irrelevant because the Buddhist liberation or salvation lies on to free oneself from endless suffering and existence), an old monk and spiritual leader and a boy monk his apprentice. I can easily call them saints because however horrible actions the young monk has commited he was able to return to the right path. He repents, he accepts his punishment, he matures and he returns to his vocation.

We see the spring season where boy monk ties little rock to fish, frog and snake and observes laughing how they struggle. Thus one of the Buddhist precepts – abstain from harming living beings – was broken. Old monk quietly observes and doesn't interfere as to teach the boy the self awareness and self discipline. Then ties a big rock to the boy's body and send him to free the animals giving him a life important lesson. Other than that they live a quietly in prayer and meditation.

Summer comes and the boy is now a teenager. A young girl is brought to the monastery to heal. Lust awakenes in young monk and another precept is broken, namely sexual misconduct. Please note how one action interwine with another. After he makes love to the girl he no longer respects the invisible walls (symbolism of morals and discipline and freedom at the same time, he may choose, he is not forced). He doesn't use the door but goes straight through the „wall“ to her. It all starts in tiny details and grows to jelousy (jelousy is a fear someone takes what is in your possession, another basic Buddhist concept is broken). It all ends up with murder. Old monk discovers them and tells the girl she has to leave. He is not angry, he is not making scenes, only thing he said to his apprentice was „lust leads to desire for possession, and possession leads to murder". Young monk then runs away to follow the girl and steals Buddha statue and rooster that was with them. As if taking his desires and also all hi learnt from his master, the whole religion (also another precept broken – stealing).

And fall is here and many years passed. Old monk accidentaly reads in a newspaper that his apprentice is wanted for murder. Appearently the girl ran off with another man and young monk couldn't face it and murders her. And there he goes coming back to the sacred valley to see his master. And not only to see him, he also wants to heal his tormented soul. But the punishment from master is not enough as master respects the law and young monk needs to go to jail. It was amazing how two detectives, first all noisy and with little respect, changed after witnessing the punishment even helping out carving the characters into the wood. I like to allude here they were all carving their characters to make it better. They all fall asleep tired (mainly the young monk) and peacefully go to serve the justice. No hundcuffs are needed. Then old monk, knowing his life is at its end performs a death ritual and dies quietly and unnoticed, just like his all life. Please note that the young monk was trying to perform the same ritual however it would be to easy for him. He needed to face the truth and fulfill his purpose as a monk.

And winter comes and paroled monk, around 40 of age, he returns to the monastery, to his home and sets on the path to self discipline and sainthood. Eventually a woman comes and brings her little boy for an apprentice. The woman then leaves but falls into the frozen lake through the hole and dies. Now the new master finds her and sees her face. It is not important who she is. He then takes the statue of Buddha and dragging a heavy stone climbs the mountain to set the Buddha reflecting on what he has done to animals when he was a child and on lesson learnt. This is for me the strongest moment of the film.

And spring is here again and all comes back with the same events as if to remind us that in order to liberate ourselves from the existence we need to go through cycles of sufferings and lives as Buddhism teaches. I believe there is the same path or pattern to achievment of sainthood throughout all the major religions. It is not about what we done but about how one is willing always to return back to the right path, way or however you may call it.

I like the way the film was directed and acted purposely campy only to emphasize the many of significant symbolism through the film and make the story more abstract to be more accessible as the lesson of life and Buddhist parable for everyone. Also Ki-duk-Kim casts 3 different faces from the apprentice (even himself) only to focus on the different states of young monk's soul at each level of his life.

Life is woderful with all that we live and we wouldn't know the beauty if we don't experience the uglyness. Only then we truly appreciate the beauty. This film is not purely Buddhist as anyone can watch it and pick up the message. This film can be effective to everybody as it is an universal film. Definitelly the masterpiece for me. Of course I respect different points of view. Thank you.