by TheUsualSuspect
posted on 8/17/16
in
Crimson Peak 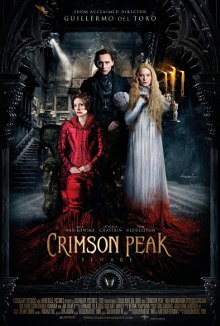 Crimson Peak offers the viewer gorgeous visuals, a creepy atmosphere and good performances from most of the cast, yet it fails to deliver any scares, thrills or genuine excitement. Guillermo del Toro might have to try being a cinematographer for a few films instead because Crimson Peak falters the same way his other films do. I should like Crimson Peak a lot more than I do, this is my relationship with all his films.

The film suffers from numerous things, but one that pops out to be is the bait and switch it gives the viewer. When one thinks of Crimson Peak, a gothic ghost story comes to mind. This simply is not the case here. Yes, ghosts are present in the film, yes they do "some" haunting, but that aspect of the film is not del Toro's focus. Instead he would rather have the story be about Chastain and Hiddleston, who plays brother and sister and live in Crimson Peak and their ulterior motives to why he should marry Wasikowska. Interesting at first, but the completely fails to live up to the expectations. Especially when characters do things out of character for thinly realized reasons. The bait and switch, tells viewers what to expect and deliver something else. We've seen this before...I'm looking at you Adjustment Bureau.

Wasikowska's the lead and I'm not sure if I just don't like her as an actress or if all her performances are the same. Ever since I saw her wooden performance in Alice, she has yet to impress or even really change up a character. Chastain and Hiddleston offer something interesting at least, then again they more experienced than Wasikowska. They both fir perfectly in this world.

But damn, does this film look great. The cinematography, the art direction, costume design, set design. These are always the highlights in del Toro films and Crimson Peak might be his best yet. The house bleeds red clay for crying out loud, a small detail that you see in the corners of the frame. Something only del Toro would do, which beautifully adds to the world he creates here. Crimson Peak, great title and great location. Too bad it takes half the film's running time to get there.