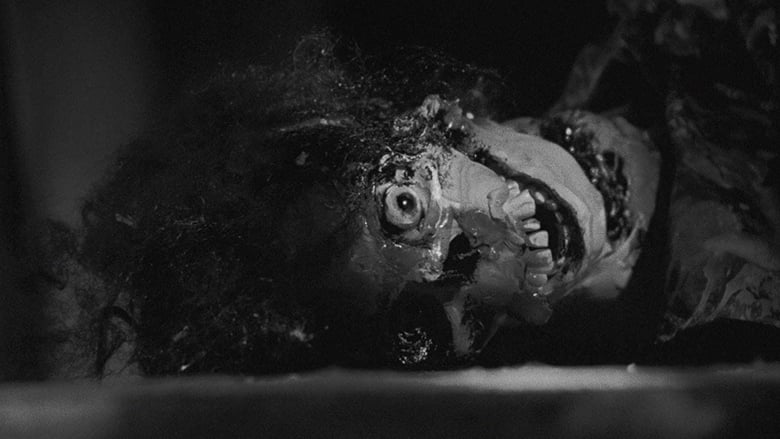 "They are coming to get you, Barbra...
there's one of them now!"

There will be spoilers in the last paragraph
It feels like it took me an entire lifetime to finally watch this film and I have put it off for a painfully long time; mainly because it seemed to be an extremely low budget and laughable zombie flick, which merely had its fame because of the fortune of later genre flicks that this one laid ground to. But I can promise you, even tough my expectations were put to rest, my excitement quickly rose up from a flat-lined state to full-blown fearsome fun! I judged this movie masterpiece before I knew that the very same movie masterpiece was actually judging me right back. Well, at least the society was put to the test amongst the unrest in this film, holding a strong social commentary and ending with a strong commanding impact that completely shook me and took me by major surpriseÖ

It has been a long time since my perception of something changed as quickly as it did with ëNight of the Living Deadí, but changed it certainly did. What worried me during the beginning ended up proving just how wrong I was later on, and once I saw things in retrospect and realized how dumb I had been, it also made me see things in a completely different way. But all this changed for me rather late in the movie, because though I found it exciting enough on its own, it wasnít until the television broadcasts came that I started to see something socially important and sharply significant within the period of which this film was made. There was so much going on when this film was made and released, both politically and ethically, and with the casting of a black man and watching him carry out violence and vengeance in a dominating and demanding role must have left audiences restless in the cinema seats. I read somewhere that the casting of a black man was without decisive social or moral intentions, but whether meant to mess with our minds and body or not, we still eat it all up by the end of it. At least I did.

And even despite of wanting to depart from details that will ultimately spill the guts for this film, I simply cannot capture the life in this picture or the life within me, without talking and walking you through the terrifying ending that evidently enforced this terrific cinematic experience even further. Once all hell breaks loose and the main characters start to die, while the walking dead die all over again, I was a little surprised though happy to see the black man still fighting his way through hell on earth, alive and well. He survives the night of the living dead and starts to hear what is probably the police or something along those lines coming to the rescue up stairs. He walks up the stairs, looks out the window and all of a sudden he falls dead to the ground from a bullet to the brain; a bullet fired by the many white men outside, mistaking him for a remaining zombie. The parallels to the time, place and historical significance is obvious whether intended or not and the very impact of it is unmistakably obvious ñ even more so, once Benís dead body ends up being burned on a bonfire together with the fallen zombiesÖ and looking at that closing montage completely out of context, a horror zombie movie is definitely not the first thing that comes to mindÖ a living nightmare of terrifying realities, realized inside a little low budget zombie flick. Now thatís powerful...