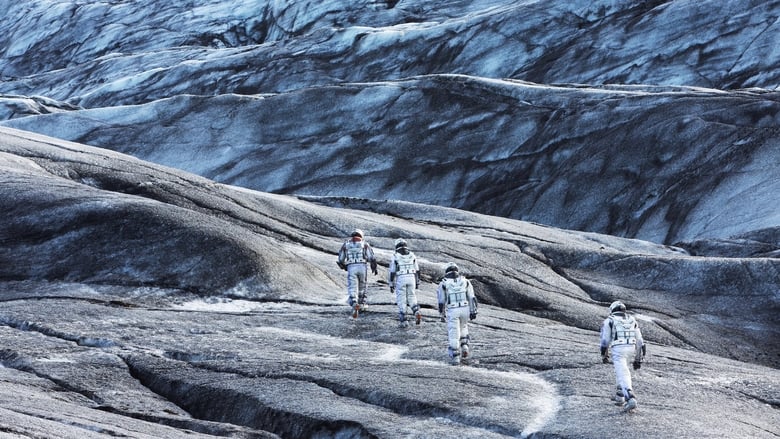 Christopher Nolan's Interstellar, the epic space travel adventure that was supposed to be Nolan's 2001, ended up being much more divisive when it hit theaters than many people expected. One only need briefly scan the reviews on the internet before they find someone claiming the film is the best science fiction film in the past decade, while the next review might slay the film completely as overlong, tedious, melodramatic and several other critical issues that completely ruined the experience for the viewer in question. I pitched my tent in the former camp pretty much as soon as the end credits rolled. Is the film long? It sure is. I certainly didn't find it tedious, but I can see how others would.

Interstellar, which stars Matthew McConaughey (Mud, The Wolf of Wall Street), Anne Hathaway (The Dark Knight Rises, Don Jon), and Michael Caine (The Dark Knight, Inception), focuses on the last years of the planet Earth. The ecosystem has broken down, most food species have died off, and the last of the genetically engineered corn the people have been surviving on is starting to fail - they figure they have just about one generation left before the human race dies off. McConaughey plays Cooper, a retired NASA pilot turned corn farmer. He lives with what's left of his family in an old farm house in corn country, in a community that is still trying to live life like the old days, even if daily life is often broken up by massive dust storms that rip through town, sending the inhabitants scurrying for cover like so many doomed rats.

Life proceeds normally enough, except for Cooper's daughter's odd obsession with what she claims is a poltergeist living in their family home. The first 15 minutes or so of the film are an odd mix of tone, and the viewer isn't quite sure which direction the film wants to go in. Is this a paranormal ghost story? A family tragedy? With all this talk of corn, ghosts, and dust storms in a little town, one may start to wonder why this film is called Interstellar, and not Casper Goes to Nebraska. Much of the early farm country stuff is some good old fashioned character development and world building, and Nolan takes his time letting the viewer settle into the morose daily life on a dying, agrarian world. After a small breakthrough in regards to the family "ghost", Cooper is presented with a dilemma by Caine's aging scientist: Take one last trip into the cosmos to pull off one of two possible plans.

Plan A dictates that Cooper buys Earth enough time for the scientists to perfect an equation that will allow a massive exodus off-world for the remaining population, while Plan B is a contingency for a Plan A failure, which when carried out, would attempt to deposit embryonic payloads onto suitable worlds in another galaxy. How can all of this be done? I won't reveal that here, but let's just say that the viewer is expected to makes some leaps of faith and logic here and there. Interstellar is concerned with its characters first, and with creating wonder second. Logic and reality fall quite a bit farther down the list, to be sure. I actually enjoyed some of the leaps they took, which had a classic feel to them, as if borrowed from a bygone era of science fiction that relied more on imagination and wonder then attempting realistic looks at future technology and society. The science is not so absurd as to reach out of the screen and shake you, as was the case in 2014's Lucy, but it plays with some of the same concepts Besson's film did, and some of this stuff is highly theoretical.

I can't talk about much more of the film's content, as that should be discovered by the viewer, and not some some loquacious reviewer! I will say that Nolan has once again gone above and beyond in terms of structure, toying with time and space in creative ways, while maintaining a starkly human story the entire time. It does slip into melodrama a bit too much here and there, so if i had to find a chink in the armor, that would be it.

I find myself fascinated by the film as I work today. Certain moments work so well, the viewer is seized by what's on screen; quiet moments and loud moments, sad moments, wonderful moments; all strung together in the vast dark, lost in the waves. Interstellar is an epic science fiction film for the ages, simultaneously visiting some familiar territory, while also pushing the envelope. A must-see film for fans of the genre.
» More about Interstellar
» More reviews of Interstellar
» More reviews by Sedai