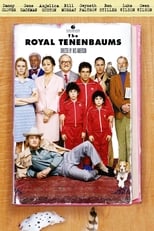 Release: Oct. 12th, 2001
Runtime: 1 hour, 50 minutes
Royal Tenenbaum and his wife Etheline had three children and then they separated. All three children are extraordinary --- all geniuses. Virtually all memory of the brilliance of the young Tenenbaums was subsequently erased by two decades of betrayal, failure, and disaster. Most of this was generally considered to be their father's fault. "The Royal Tenenbaums" is the story of the family's sudden, unexpected reunion one recent winter.

TheUsualSuspect I'm not the biggest fan of Rushmore I found it boring and the lead character just rubbed me the wrong way, so much to my surprise I ended up loving Anderson's next film, The Royal Tenenbaums.
READ REVIEW

Gideon58 Royal Tenenbaum (Gene Hackman) and his estranged wife, Ethilene (Anjelica Huston) raised three children together who all turned out to be different kinds of child prodigies: Chas (Ben Stiller) was a child financial wiz who is now raising twin sons and has never really gotten over the death of their....
READ REVIEW

kkl10 This film genre is not usually very interesting to me, but Wes Anderson stylized and bittersweet comedy offered me moments of pleasure and was music for my eyes (and ears), the only thing that I didn't care for was the story itself, Wes style and writing works very well to develop these humorous....
READ REVIEW