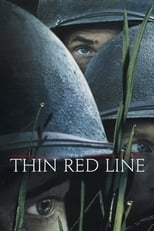 Release: Mar. 5th, 1998
Runtime: 2 hours, 50 minutes
Based on the graphic novel by James Jones, The Thin Red Line tells the story of a group of men, an Army Rifle company called C-for-Charlie, who change, suffer, and ultimately make essential discoveries about themselves during the fierce World War II battle of Guadalcanal. It follows their journey, from the surprise of an unopposed landing, through the bloody and exhausting battles that follow, to the ultimate departure of those who survived. A...

We didn't find any linked discussions for this film. Here are the results of a quick search of possibly related threads:
7 The Thin Red Line
I just watched this movie for the second time on tv, and in the afterglow of a good movie I just had to post a review here! The first time I saw it was when it came out in the cinema with a friend, bu...
3 The Thin Red Line SUCKED!!!
There might be spoilers in this thread, but thats a good thing in regards to this piece-O-CRAP! I know its been ten years since this movie was released, but you all seem the sort I want to wail too so...
31 Saving Private Ryan vs The Thin Red Line
Two great films for entirely different reasons, Saving Private Ryan's technical brilliance is just astonishing and Malick's artistic expression in The Thin Red Line is equally so. Overall though ...
8 The Thin Red Line (Terrence Malick), Is the crew in this scene?
In this scene the crew is in the scene right? Or maybe am I wrong? ...
0 Best Thin Man Film
My aunt made me watch the first two Thin Man films last weekend, and I enjoyed them quite a bit. They're not masterpieces or anything, or even great films, but they're nice entertainment. The Thin ...

akatemple This is the battle for Guadalcanal Island, Nick Nolte plays a intense career officer not seeming to care about how many of his men die but just caring about getting the mission complete on his superiors time table.
READ REVIEW