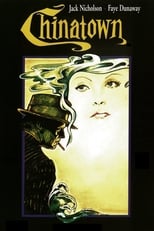 Release: Jun. 20th, 1974
Runtime: 2 hours, 10 minutes
Private eye Jake Gittes lives off of the murky moral climate of sunbaked, pre-World War II Southern California. Hired by a beautiful socialite to investigate her husband's extra-marital affair, Gittes is swept into a maelstrom of double dealings and deadly deceits, uncovering a web of personal and political scandals that come crashing together.

We didn't find any linked discussions for this film. Here are the results of a quick search of possibly related threads:
16 Chinatown vs The Conversation
Two brilliant, captivating, haunting thrillers of 74. Which is better?...
23 Vertigo vs Chinatown
Arguably the two best noirs ever made. Both imo rank among the 10 best films ever made. Both feature absolutely flawless cinematography. Both feature unbelievable performances from Stewart and Nichols...
5 Chinatown (Polanski, 1974)
Yeesh...tough to stomach this one, especially the ending. Great film, but probably not one I'll be watching very often. 9/10...
23 Lightning Poll: Chinatown vs. The Graduate
Vote early and vote often kids! This poll closes tomorrow at around 11:00 am Pacific time. That should give most of you a chance to cast a vote for either Chinatown or The Graduate. ...
46 The MoFo Movie Club Discussion: Chinatown
OK folks! As usual this is a spoiler free zone so if you've yet to see Chinatown you may want to back right on out of here now because we're going to chop this bad boy up and then some, dig? Now then...

Daniel M In his initial scenes he seems fairly normal but there are dark menacing undertones that make us feel early on that Jake may be in way over his head, but by the end we realise he is one of the most evil and unlikable villains in film history.
READ REVIEW

mark f The scene where the "real" Evelyn Mulwray shows up is a classic where Gittes talks about "contemplating the moon", but it introduces many of the concepts of Film Noir into modern film usage.
READ REVIEW

Citizen Rules Luckily for film noir buffs, the 1980s & 1990s brought a new fresh style to film noir that no longer was emulating what had been done before.
READ REVIEW
View All (7)