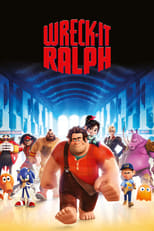 Release: Nov. 1st, 2012
Runtime: 1 hour, 48 minutes
Wreck-It Ralph is the 9-foot-tall, 643-pound villain of an arcade video game named Fix-It Felix Jr., in which the game's titular hero fixes buildings that Ralph destroys. Wanting to prove he can be a good guy and not just a villain, Ralph escapes his game and lands in Hero's Duty, a first-person shooter where he helps the game's hero battle against alien invaders. He later enters Sugar Rush, a kart racing game set on tracks made of candies...

We didn't find any linked discussions for this film. Here are the results of a quick search of possibly related threads:
29 Wreck-It Ralph
The moment that really go me was seeing all the characters from my childhood ACTUALLY being in the film. Must have cost Disney some dough to get the licensing rights. ...
5 Wreck-It Ralph 2
I would post the link if I was able to, but yeah, Google it... Mario will make his presence known I guess, so, let's hope we see some Tanooki madness!...
2 Wreck-It-Ralph
Wreck it Ralph (Rich Moore) The Best Animated Film of the Year Disney, taking a cue from Pixar, showed a short film before the screening of Wreck it Ralph. It was a cute mixture of different...
0 Ralph McQuarrie Passes Away at 82
Source:G4 ...
6 Seinfeld unhurt after Hamptons car wreck
EAST HAMPTON, N.Y. - Jerry Seinfeld was in a harrowing rollover wreck but was unhurt after the brakes on one of his vintage cars failed. Seinfeld was driving alone when the brakes ...

MovieMeditation Staying in one world would have been boring, but going through multiple drastically changes the look and feel of the film several times throughout, making it seem like a completely different movie especially when we get to the last third where that and the climax mainly takes place in a huge pink a....
READ REVIEW

JayDee Even outside of the game their movement is very jerky and awkward, imitating that of old games and lacking the fluidity of characters from modern gaming.
READ REVIEW

Gideon58 Tired of being a bad guy, Ralph decides to change his life by earning a medal in another game called Hero's Duty, but becomes separated from his medal and the journey to retrieve leads him to another game called Sugar Rush where a little girl turns out to be the key to getting his medal back but, of....
READ REVIEW
View All (6)