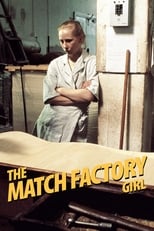 Release: Jan. 12th, 1990
Runtime: 1 hour, 9 minutes
Iris has a soul-deadening job as a quality-control worker watching boxes of matches go by on an assembly line all day. At night, she eats silently with her dour mother and stepfather. One weekend, wearing her new red dress at a local dance, she ends up going home with Aarne, whom she mistakenly believes is her new boyfriend. When she discovers that she's pregnant, years of pent-up rage explode in a shocking outburst.

We didn't find any linked discussions for this film. Here are the results of a quick search of possibly related threads:
4 Football factory
I got this for xmas thought it was a really good. This is worth seeing for thoses people who are football thugs lol and people who are interested in mass punch ups. Its a funny film as well especially...
9 Fear Factory
Has anyone heard about Fear Factory getting back together?...I heard that they are getting back together withou Dino and are looking for a new guitarist....anyone else heard this?...
8 football factory
hello, im new an signed up to ask if anyone knows.... have there been 2 different versions of football factory? i have seen one which seems to be a bit slower, an has older music on it, blondie etc, ...
4 Charlie and the Chocolate Factory
My Evaluation of Charlie and the Chocolate Factory There are many fun and wacky movies out there and Charlie and the Chocolate Factory the movie done by Tim Burton is one of them. With Tim’s...
3 Charlie and the chocolate factory?
Any upcoming news on Tim Burtons let me know. ...

Takoma11 A young woman named Iris (Kati Outinen) lives in a city in Finland with her mother and stepfather, working days in a match factory and spending her nights unsuccessfully looking for love in nightclubs.
READ REVIEW