Related: The Harry Potter and the Sorcerer's Stone Quiz

Harry Potter and the Philosopher's Stone 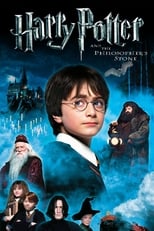 Release: Nov. 16th, 2001
Runtime: 2 hours, 32 minutes
Harry Potter has lived under the stairs at his aunt and uncle's house his whole life. But on his 11th birthday, he learns he's a powerful wizard -- with a place waiting for him at the Hogwarts School of Witchcraft and Wizardry. As he learns to harness his newfound powers with the help of the school's kindly headmaster, Harry uncovers the truth about his parents' deaths -- and about the villain who's to blame.

We didn't find any linked discussions for this film. Here are the results of a quick search of possibly related threads:
57 Harry Potter and the Philosopher's Stone
Sunday morning, I packed into a car with 7 cousins of mine, ages stretching from 11 to 16, to see the movie I've been waiting months to see, Harry Potter. Was I impressed? Yes. Is it a good movie...
8 Harry Potter and the Sorcerer's/Philosopher's Stone
So, why aren't you geeks all a quiver with chat about how awesome this double-disc DVD is? Has the obvious superiority of The Lord of the Rings: The Fellowship of the Ring and all-out comic book fun o...
171 Harry Potter
I thought it would be interested to see what everyone though HP would make in its first weekend... My pick: $75 million...
5 Harry Potter 2 - Not Bad
What a fantastic film. Well...fantastic until the last half-hour, when, like the first film, it drags on FOREVER...I'm not asking Columbus to change to book to make it shorter but stop teasing us and ...
15 Harry Potter on DVD
Sources say May, but no exact details on what specs will be available....

KeyserCorleone The movie relies on its magical atmosphere as opposed to an abundance of special effects which so many 2000's movies were guilty of doing.
READ REVIEW

MovieMad16 Harry Potter 1 is a great introduction to the whole of Harry Potter without the books.
READ REVIEW

Yoda Here's hoping that the second movie ("Harry Potter and the Chamber of Secrets," already in production, and due out in November of 2002) keeps what's right (mind if I praise The Sorting Hat, Ollivander, the Weasley twins, and Wood once more?), and improves on what's wrong.
READ REVIEW