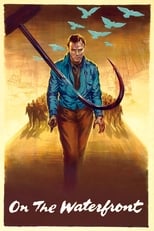 Release: Jun. 22nd, 1954
Runtime: 1 hour, 48 minutes
Terry Malloy dreams about being a prize fighter, while tending his pigeons and running errands at the docks for Johnny Friendly, the corrupt boss of the dockers union. Terry witnesses a murder by two of Johnny's thugs, and later meets the dead man's sister and feels responsible for his death. She introduces him to Father Barry, who tries to force him to provide information for the courts that will smash the dock racketeers.

We didn't find any linked discussions for this film. Here are the results of a quick search of possibly related threads:
5 On the Waterfront
I thought I had seen it, though I didn't until last night. What despised me, the credits when you check out the cast. One website didn't even mention Eva Marie Saint...****! ...

seanc What shocked me while watching the film though is that Malden is every bit as great as Brando, playing the priest with a true conscious for the people.
READ REVIEW

TheUsualSuspect On The Waterfront is a powerful film that has Brando as an ex-prize fighter, standing up to the union bosses after he is unknowingly involved in a murder.
READ REVIEW
View All (5)