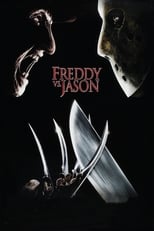 Release: Aug. 15th, 2003
Runtime: 1 hour, 37 minutes
In an attempt to free himself from a state of forgotten limbo, evil dream-demon Freddy Krueger (Robert Englund) devises a plan to manipulate un-dead mass murderer Jason Voorhees (Ken Kirzenger) into slicing-and-dicing his way through the teenage population of Springwood. But when the master of dreams loses control of his monster, a brutal fight to the death is the only way out in this long anticipated crossover between two of modern horror's...

39 Freddy vs. Jason
come on ppl let's get to the bottom of this...is it going to happen or not??? and honestly who do you want/or see winning? my vote: Freddy...he is alot more powerful(technique wise) yeah so jason ...
228 Freddy VS Jason 2
Im new and Im sure this is been posted before but I was wondering, When do they plan on shooting this, and when should we expect a realse date? Anyone know? I heard they are gunna put Michael Myers i...
622 Freddy Vs. Jason 2 (again)
i hoped we could pick up this topic again, without getting the board shut down , so, where were we, something about who is better between ash and Jason, either way No FLAME WARS, it was a good...
81 Freddy vs Jason
According to comingsoon.com this film is dated for an august 2003 release. The basic plot is : "a character who finds himself pitted between the two combatants, and so his mission is to try...
18 Freddy VS Jason VS?
All horro movie lovers seen Freddy VS Jason I just want to know what would you like to see? Freddy Vs Jason VS who? I woud pick Freddy VS Jason VS Michal Myers....

cat_sidhe This movie picks up where Jason Goes To Hell left off and it is in hell that Freddy, forgotten and therefore powerless, gets the brilliant idea to mentally manipulate Jason into killing for him.
READ REVIEW

TheUsualSuspect In reality Freddy Versus Jason is only a ten minute film, those ten minutes come at the very end of the movie, where it is actually freddy fighting jason.
READ REVIEW