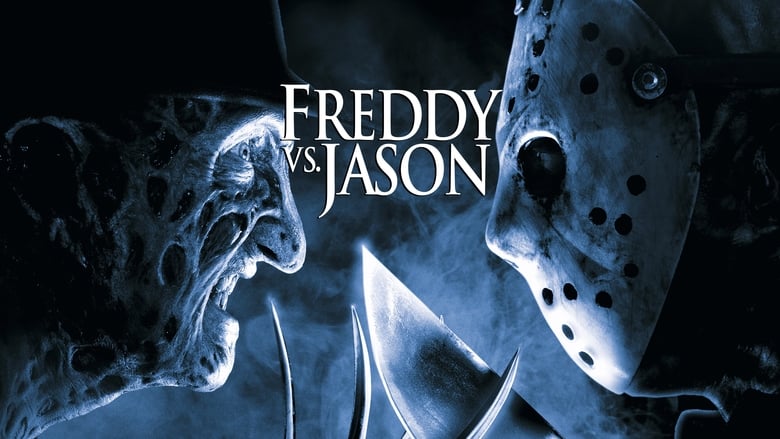 Finally, we get what we've been teased with for many years, but it's a bittersweet feeling as a dirty was done to the only regular Jason we've ever had, the one we love the most, the one we pretty much identify as Jason Voorhees. Kane Hodder was given the script, in other words, business as usual, only to find out later that he'd been replaced. He was never given a reason why. They told him something lame eventually, about wanting someone with "more expressive eyes". I know. My ass. I suppose in a way it's ironic that Hodder gets to be haunted by Jason a bit. In any event, they at least chose a decent replacement in Ken Kirzinger (aka the huge chef Jason casually threw into the diner mirror in Friday the 13th Part VIII: Jason Takes Manhattan).

This movie picks up where Jason Goes To Hell left off and it is in hell that Freddy, forgotten and therefore powerless, gets the brilliant idea to mentally manipulate Jason into killing for him. When the teenagers are afraid, they'll remember him and thus give him power. Great plan, and for the most part, it works. Except for the fact that Jason's too efficient and starts doing ALL the kills, putting Freddy right out. Territorial pissing bloodletting ensues, culminating in an epic, brutal face-off.

Well! This is quite satisfying. Lashings of blood, some great kills, and quite a few genuinely funny moments from Freddy. He's great, ever the consummate entertainer. The showdown is kind of amazing, and weirdly hot.

Get a room, you two.

This Jason definitely gets a nod from me, but then again, I don't dislike any of the Jasons. I feel a bit bad for the ones who prefer Freddy over Jason, as although he gets plenty screen time, he doesn't get all that much scream time. I actually wonder if Jason getting all the gory glory wasn't partly to appease the disgruntled fandom over replacing Hodder. And maybe partly to have a bit of fun with Freddy for his arrogance as he clearly underestimated Jason, and overestimated his own power of control. Huge heart, small brain, remember?

Freddy breaks out his Karate Kid moves after he loses control of his puppy.


I forgive it things that make you go "huh?", like having Jason be afraid of water (yet he swam to Manhattan like, 3 movies ago - but I believe the franchise has been back and forth on this one. He is and he isn't, ok?

), but I quite like the elemental symbolism evident with both Jason and Freddy. Water and fire.

Definitely had fun with this.

+ Dude, that goalie was pissed about something!