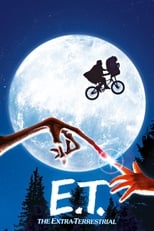 Release: Jun. 11th, 1982
Runtime: 1 hour, 55 minutes
After a gentle alien becomes stranded on Earth, the being is discovered and befriended by a young boy named Elliott. Bringing the extraterrestrial into his suburban California house, Elliott introduces E.T., as the alien is dubbed, to his brother and his little sister, Gertie, and the children decide to keep its existence a secret. Soon, however, E.T. falls ill, resulting in government intervention and a dire situation for both Elliott and the alien.

We didn't find any linked discussions for this film. Here are the results of a quick search of possibly related threads:
2 E.T. the Extra-Terrestrial
Update for ya'll: Limited Edition "E.T." DVD Information ...
2 Extra Credit
We've all done it; left the theater just after the movie ends only to find out that we missed something that will either set up the sequel, or make us laugh. And we thought the credits rolling meant t...

seanc Michael is older and at times gives Elliot a hard time as is to be expected but at the same time you know that these brothers are having the same experiences and would step in front of a bus for each other.
READ REVIEW

MovieMeditation Steven Spielberg is a man who knows his movies and his magic, which when combined creates something completely out of this world and Im just glad this magic ended up in our world just for a short period in time and in space.
READ REVIEW

Citizen Rules Talk about a movie that took me back in time...I last watched E.T.
READ REVIEW
View All (5)