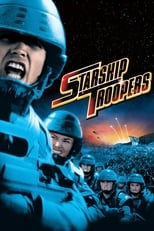 Release: Nov. 7th, 1997
Runtime: 2 hours, 9 minutes
Set in the future, the story follows a young soldier named Johnny Rico and his exploits in the Mobile Infantry. Rico's military career progresses from recruit to non-commissioned officer and finally to officer against the backdrop of an interstellar war between mankind and an arachnoid species known as "the Bugs".

We didn't find any linked discussions for this film. Here are the results of a quick search of possibly related threads:
4 Starship Troopers DVD
Got this on DVD for xmas. Eh, Good features etc. They do the screen tests, and commentaries, and a documentary. Just wondering if anyone else has this DVD. Becaus I found an egg on it, "ed's ...
9 Starship Troopers 2
Starship Troopers 2 Trailer...
8 Starship TROOPERS 2
Have you heard that Phill Tippett is directing the new Starship Troopers 2 film, it's being shot on Hi def ( not film ) and is straight to DVD ( 6 million budget ) Anyone think this could be bad ? ...
8 Starship Troopers II
That's right! They're making another one. It'll take place in the same time that the first one happend - after the war had began, but before the brain-bug was found. The same brilliant writer wr...
6 Starship Troopers is getting a makeover
"Mark Swift and Damian Shannon, the writing duo behind the upcoming Zac Efron-Dwayne Johnson 'Baywatch' movie, will write the script for the alien-bug war film. The studio is not ...

The Rodent Different to the novel, the movie follows a handful of school leavers who embark on a life journey by joining the military in the fight against The Bugs (also known as Arachnids), a species of giant insect that live on the other side of the Milky Way.
READ REVIEW

Iroquois From then on, the film turns into a play-by-play war movie as our heroes go through basic training and then get thrown into the fray again and again until the movie ends and enough of the cast have died gruesome deaths.
READ REVIEW
View All (6)