The deadline for the Top Films of the 2000s list is days away! Submit your ballot now, or read about it here
← Back to Movies 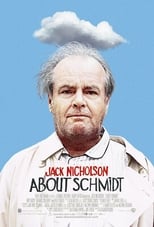 Release: May 22nd, 2002
Runtime: 2 hours, 5 minutes
66-year-old Warren Schmidt is a retired insurance salesman and has no particular plans other than to drive around in the motor home his wife insisted they buy. He's not altogether bitter, but not happy either, as everything his wife does annoys him, and he disapproves of the man his daughter is about to marry. When his wife suddenly dies, he sets out to postpone the imminent marriage of his daughter to a man he doesn't like, while coping with...

We didn't find any linked discussions for this film. Here are the results of a quick search of possibly related threads:
8 About Schmidt
fabulous film starring jack nicholson in his best performance to date as a newly retired vp from an insurance company kathy bates is marvelous as the divorced mother of the son that is marrying nic...
3 About Schmidt dvd
Did you guys get this dvd with an insert? Mine had nothing in it except for the disc!!...
3 About Schmidt (2002)
About Schmidt (2002) Directed by Alexander Payne Written by Alexander Payne and Jim Taylor (Based on a novel by Louis Begley) Starring Jack Nicholson At certain points in our lives, all...
0 life as a house/ about schmidt/ frida/ i am sam
1. life as a house - although the director shoots for realism in this movie that has an interesting premise, the sexual content is unecessary for the advancement of the plot. 2. about schmidt - i...

mattiasflgrtll6 After he gets some time alone with John's wife Nicki, she starts to psychoanalyze him, and sees right through his happy fascade right away that he's been unhappy for a long time, and feel like he's accomplished nothing.
READ REVIEW

PHOENIX74 It's something that Schmidt himself seems to have not bothered thinking about much at all during this life - and we're about to see how little Warren Schmidt's life really means.
READ REVIEW

meatwadsprite Warren Schmidt has just retired from his job - which he really didn't want to quit : and begins his boring retirement.
READ REVIEW