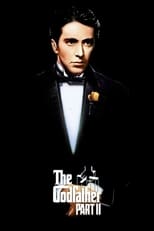 Release: Dec. 20th, 1974
Runtime: 3 hours, 20 minutes
In the continuing saga of the Corleone crime family, a young Vito Corleone grows up in Sicily and in 1910s New York. In the 1950s, Michael Corleone attempts to expand the family business into Las Vegas, Hollywood and Cuba.

3 Ending
I watched this movie again recently, and I was struck by the very end frame. We know about oranges and the colour orange meaning danger or death in the film. So I noticed that Michael's wedding ring f...

TheUsualSuspect Moments of violence can thrill people, disturb people or shock, but put two talented actors in a room, give them a well written scene and an emotionally distraught story element and you can have more success at garnering emotions from the viewer than anything else.
READ REVIEW

Citizen Rules Those mini series were much more developed in their stories than Godfather Part II, which lacks character arches or in depth story development.
READ REVIEW

TylerDurden99 While it's hard to distinguish which is the best, there's no denying that [i]The Godfather Part II[/i] is a quality made drama, with striking performances and imagery..
READ REVIEW
View All (7)