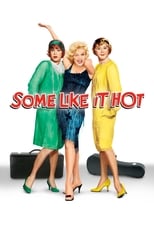 Release: Mar. 19th, 1959
Runtime: 2 hours, 2 minutes
Two musicians witness a mob hit and struggle to find a way out of the city before they are found by the gangsters. Their only opportunity is to join an all-girl band as they leave on a tour. To make their getaway they must first disguise themselves as women, then keep their identities secret and deal with the problems this brings - such as an attractive bandmate and a very determined suitor.

Cobpyth The film may never truly leave its comical mood, but I still feel related to these characters every time I watch it.
READ REVIEW

JayDee For such a light-hearted film it actually contains some great action (the opening chase between the cops and Spats' goons) and the main story is kicked off by multiple gangland murder, not something you'd expect for such a sweet, family film; particularly in the 50s.
READ REVIEW

mark f This is Billy Wilder's second-best film to me, only after the under-seen One, Two, Three.
READ REVIEW
View All (5)